Will the eurozone gang up on Britain?

Both British eurosceptics and Britain’s continental critics believe some or all of the following: that the eurozone will have to integrate further; that the priorities of the eurozone will predominate over those of the euro ‘outs’; and that David Cameron will win nothing but minor reforms in any negotation.

In this view, the “remorseless logic” of eurozone integration will marginalise Britain to such an extent that it will be forced to leave the EU, since it will not join the euro. This argument has some merits – there is little reason to believe that the British have enough political capital to lead a push for major EU reform, for example. But the economic interests of the ‘ins’ and ‘outs’ are aligned to a greater degree than they are opposed. If these interests are managed with care, there is no reason why Britain should leave the EU.

The eurozone needs to integrate in two ways to become more stable. It needs a more integrated market for capital and labour, so that workers and capital can move easily to the places where they can be most productively employed. This would help it to respond to shocks more rapidly, and requires a deeper single market – one of Britain’s reform priorities. The eurozone also needs a way to share risk – a common budget, a common backstop for the banking sector, and further debt mutualisation – to help stabilise demand in countries in recession. There is little appetite in the eurozone for such a system at present, but the next downturn may force it to reconsider. Greater integration would make its economy less fragile – and would in turn help Britain. The eurozone is Britain’s largest trading partner, and its crisis has badly hit British exports, putting paid to hopes of an export-led recovery.

British fears that a eurozone ‘caucus’ will materialise, particularly on single market regulation, are overblown. The Germans, Finnish and Dutch have little interest in, say, extending ‘social Europe’ – and align themselves more with the British on social and employment rules. Western Europeans in general are as concerned about immigration from Central and Eastern Europe as the British, even if the tone of their newspapers and mainstream politicians is less hostile. Italian prime minister Matteo Renzi has made a deeper single market for services one of his priorities. 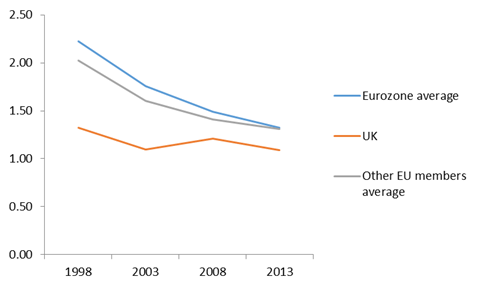 Chart 2 shows the OECD’s measure of the willingness of countries to open their markets to foreign competition. It shows the same pattern of convergence as the overall index, and offers little evidence that the eurozone will club together to block free trade deals or the European Commission’s initiatives to extend the single market. 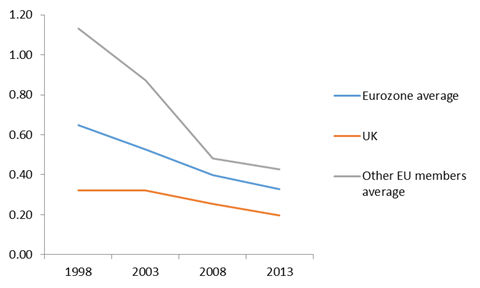 If the eurozone ‘caucus’ is going to be a problem, it will be in decisions on financial regulation. The City of London’s position as the EU’s dominant wholesale financial centre – and one that is outside the eurozone – would seem to suggest a major clash of interests. Many Britons fear that the the rest of the eurozone will gang up on the City in an attempt to shift activity to Frankfurt and Paris. However, the situation is more complex than City of London banks, the British media and eurosceptic think tanks suggest.

The UK has already won a double majority voting system on the European Banking Authority – the agency that writes EU ‘prudential’ financial rules, which seek to prevent the financial system from blowing up. Under the system, both eurozone and non-eurozone members must find a majority in favour of a financial rule. Eventually, if other member-states join the single currency, this system will have to be revisited, as it would end up giving Britain disproportionate power over regulation. But this is likely to be a long time coming: Poland, the Czech Republic, Sweden, Hungary, Croatia, Romania and Bulgaria do not look likely to join the single currency any time soon. Denmark has a opt-out from the euro, like the UK.

Moreover, British and eurozone member-states do not have serious differences over prudential regulation. The UK has gone further than most other EU member-states to force their banks to raise capital and liquidity, to reduce leverage, and to try to ringfence retail and investment banking. Before the crisis, the UK was rightly accused of running a light-touch regime. This charge no longer holds: now the problem lies in the difficulty of creating a eurozone banking union that is capable of preventing banking crises and limiting their effects when they do occur.

There are areas where the UK is losing its battles, but it is far from clear that a eurozone ‘caucus’ is to blame. The financial transactions tax is likely to be a lower tax on a smaller number of financial instruments than the original proposal, because the member-states that have signed up to it – several eurozone members have not – cannot agree on how much activity it should catch in its net. It may end up covering only shares and some derivatives. If so, the financial transactions tax would be similar to the UK’s stamp duty on shares, which also has extraterritorial reach: an investor from another EU member-state that sells a share in a British company must pay UK stamp duty. And the European Court of Justice has yet to rule on the final proposal. It may find that the extraterritorial scope of the tax means that it is illegal under the EU treaties (as the European Council's legal service has found).

But is not the European Central Bank’s (ECB) ‘location policy’ a sign of increasing regulatory protectionism on the part of the eurozone? Last week, the European Court of Justice started hearing evidence on the British government’s case against the policy, and if it rules in favour of the ECB, City clearing houses specialising in euro-denominated trading will relocate across the Channel. The British media has turned the case into a test of the EU institutions’ willingness to balance British interests against those of the eurozone. The ECB’s rationale for the policy is not without justification: it argues that it should supervise clearing houses, since they will need emergency central bank lending in euros – ‘liquidity’ – if they get into trouble. Clearing houses are increasingly important bearers of risk, because complex derivatives – financial contracts that were at the centre of the 2008 crash – are being standardised and investors forced to trade them on exchanges. Regulators hope that this will make the risks in the financial system more transparent. If a clearing house gets into trouble, derivatives markets will freeze, unless the central bank keeps it going with liquidity. And in trades denominated in euros, most participants are large eurozone-based banks: the ECB has a legitimate interest in the supervision of this activity. The British should not blame eurozone protectionism for the ECJ’s ruling, if it concurs with the ECB.

There are a few other areas where it is possible to envisage conflict in coming years. The resolution of a eurozone headquartered bank with large operations in the City of London is one. The eurozone and the UK government may have opposing interests when it comes to resolution: eurozone authorities will seek control of the bank’s assets, even if a part of its balance sheet is under the Bank of England’s jurisdiction. There are unresolved questions about how banks that get into trouble in London will access ECB liquidity.

But the City of London’s position as the EU’s largest wholesale centre does not appear to be severely imperilled by the eurozone. And even where conflicts do arise, as a member of the EU, it can form alliances with other member-states to make changes to proposals and defend its single market rights at the ECJ. Rather, the potential for serious conflict lies more in the EU’s institutions and priorities than its rules. The solution lies in diplomacy.

The British government will have to get used to the fact that the top jobs in the next European Commission will mostly go to eurozone member-states, as the UK is the only rich and large EU country that is not in the euro. There is some sympathy in Northern Europe for the UK’s position. But the British are squandering this sympathy, by pursuing a strategy of threats, vetoes, and red lines. The source of the trouble is the Conservative demand for a renegotiated settlement as the price of the UK’s continued membership of the EU. This strategy was intended to appease English euroscepticism while securing policy changes at the EU level, but it has stoked anti-British sentiment to the degree that other member-states fear making common cause with the UK. And the strategy makes it harder to create the conditions for compromise between the interests of the eurozone, the UK government and the City of London that is needed to make Britain’s position – in the EU, but not in the eurozone – legitimate on both sides of the Channel.

The route to a new EU settlement will be slow and tortuous. The eurozone will probably have to integrate further to flourish, and, over time, some member-states who have committed to joining will do so. But there are few reasons why a political settlement between members of the single market and of the eurozone cannot be reached, if politicians will only try.