Reduced to rouble? An update on the Russian economy

Recent events in Ukraine have shown that Russia is determined to change the balance of power in Europe. Whether Vladimir Putin can be stopped by diplomacy or sanctions remains an open question (and is the subject of a forthcoming CER policy brief). Russia’s economy, however, is in deep trouble. Although the oil price and the rouble have stabilised, the Russian economy will go through a long, deep and painful recession as high interest rates and poor access to finance hits investment, inflation erodes customers’ disposable incomes and the government tightens fiscal policy. A renewed fall in the oil price and the rouble would be likely to lead to a severe crisis, as Russia’s foreign reserves are dwindling, and renewed capital flight could lead to the imposition of capital controls. The problem is that a collapse and subsequent bailout of Russia is not in the interest of the West.

Putin’s first decade in power was underpinned by rising oil prices, which allowed a rent-seeking elite to earn fortunes from Russia’s mineral wealth. As a result of the resource boom, the rouble’s real effective exchange rate (which takes Russia’s high inflation into account) rose strongly from 1999 to 2008. This made non-resource export industries uncompetitive – a common phenomenon of resource-rich countries called ‘Dutch disease’ (see chart 1). 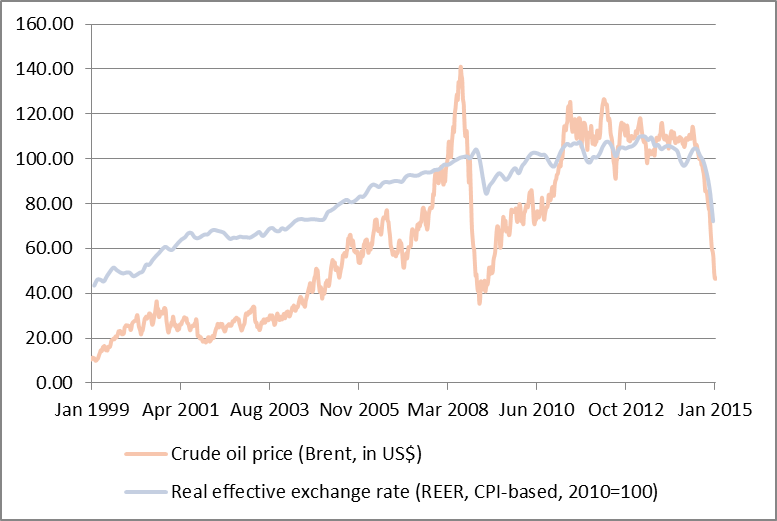 Source: Federal Reserve Economic Data (FRED)
Notes: The nominal effective exchange rate weighs all the exchange rates of the rouble with other currencies by the share of Russian trade with these countries. The REER adjust these exchange rates for the difference in inflation between pairs of countries.

Ordinary Russians also saw their incomes grow, but the rule of law weakened and corruption flourished: Russia ranked 136th out of 172 countries surveyed by Transparency International in 2014. Long before the hammer blows of sanctions, falling oil prices and a collapsing currency, the Russian economy was stagnating. Now Russia is in recession. In January, confidence indicators in the service and manufacturing sectors dropped to new five-year lows, pointing to a large contraction in activity. The IMF predicts a contraction of 3 per cent of GDP in 2015, but it could be much worse.

The two main reasons for the recession are the fall in the oil price and the decline in the value of the rouble (see chart 1), which are closely connected. Lower oil revenues (in US dollars) mean less demand for the Russian currency. In addition, the loss of confidence in the Russian economy, combined with financial sanctions and political uncertainty, has led to capital flight as wealthy Russians and foreign investors dump rouble assets. That is not only leading to a collapse in investment, which further weakens the economy, but also exacerbating the fall in the currency. Overall, $151.5 billion of private capital left Russia in 2014. To put that figure into perspective, foreigners held direct and portfolio investments in Russia in the order of $477 billion and $225 billion respectively (at the end of September).

The Russian central bank has intervened heavily to defend the rouble (see chart 2). At the end of January 2015, Russia had $376 billion in reserves, down from $499 billion a year earlier. Nearly half of the remaining reserves, however, are not under the full control of the central bank. Two sovereign wealth funds, the Reserve Fund (current foreign and domestic assets of roughly $88 billion) and the National Wealth Fund of the Russian Federation ($78 billion, down from $89 billion a year ago), hold large reserves and are under the control of the Kremlin.

In recent weeks, the oil price, and as a result the rouble, have stabilised and somewhat recovered from their lows. But the risk of a further fall in the rouble is still large. If investors expect that currency reserves will run out and that the central bank will have to impose strict capital controls to stop outflows, investors and Russians might opt to reduce their exposure to rouble assets quickly. And any capital controls would be a major obstacle to foreign investment in Russia. 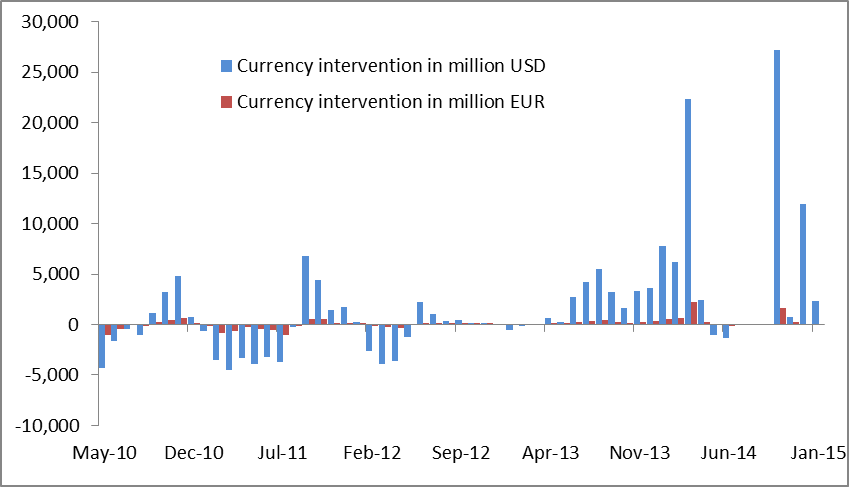 One negative impact of a falling rouble is inflation. Food prices in particular have risen dramatically in recent months, in part because of Russian counter-sanctions on food imports, which were imposed on August 6th 2014 (see chart 3). Such imported inflation lowers the real incomes of households; as a consequence, they are spending less on Russian goods, hurting the economy. 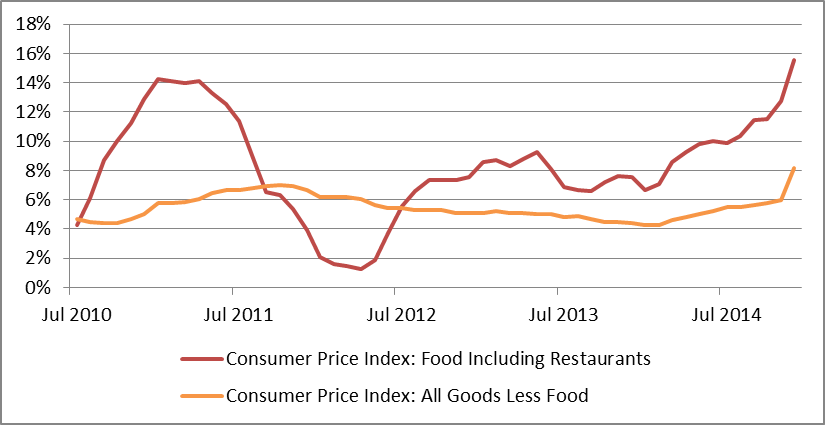 Another negative effect of a falling rouble is high interest rates. In an attempt to stabilise the currency in mid-December, the Bank of Russia raised its key rate to 17 per cent. With non-food inflation at 9 per cent, that means that real interest rates are prohibitively high at around 8 per cent, which is depressing consumption and investment. This is a classic dilemma of emerging markets in crisis: the central bank is trapped between having to stabilise the currency by means of higher interest rates and helping the wider economy, which would benefit from lower rates. The central bank cut interest to 15 per cent in late January, but this will only marginally lower the negative impact on the domestic economy.

The final problem of a falling rouble is that it causes the value of debt in foreign currency to balloon. The current external debt of banks and firms stands at $600 billion. It has fallen by $130 billion over the past six months, as international investors were unwilling to roll over maturing debt. But calculated in roubles, the foreign debt increased from 24.9 trillion to 33.8 trillion over that period. In 2015, these banks and firms have to repay $110 billion in 2015, and another $53 billion in the first nine months of 2016 (see chart, late 2015 and 2016 data quarterly). Russia’s current account surplus, from which that external debt could be repaid, is just below $60 billion a year – and bound to fall because of the decline in the oil price. This means that Russia will need to run down foreign currency assets in 2015 to cover the difference. 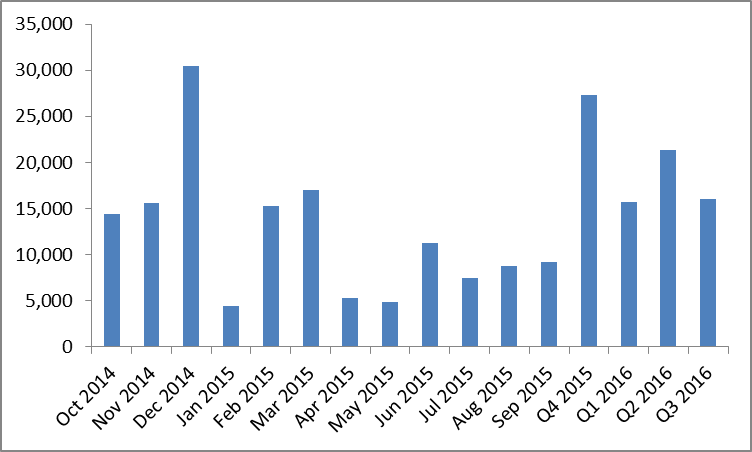 There could be one silver lining: a weaker currency benefits exporters. But business surveys find that manufacturers have suffered from declining export orders for their products for 17 months in a row – including the last couple of months during which the fall in the rouble would be expected to have some positive effect on export orders. One reason is that Russian manufacturers often supply investment goods to the global energy sector, which is suffering from falling energy prices. Another reason is years of under-investment in other sectors of the economy.

Falling oil prices have hit the state budget hard. Although President Putin has said lower oil prices are not “a tragedy”, Russia relies on fossil fuel revenues to finance half its budget. Russia’s 2015 budget was originally based on oil prices of $100 a barrel, but the government currently expects an average price of just $50, which given average market forecasts of around $55 for 2015 is reasonable. Since military spending is forecast to increase, the government must make big cuts elsewhere. Such fiscal retrenchment will further depress economic activity. The Russian government will struggle to borrow from abroad: one of the three main rating agencies, Standard & Poor’s, has already downgraded Russian government bonds to non-investment grade status (also known as ‘junk’), and the rating of the other two, Moody’s and Fitch, are just a whisker above the threshold.

EU and US sanctions have cut off some Russian banks and companies from direct access to western financing. Some key companies and banks now need to turn to the central bank and the government for funding, putting further strain on Russia’s foreign exchange reserves. But western finance is also hard to tap for those firms and banks that are not among the sanctioned, as western banks are afraid to fund them, fearing that Russia’s deteriorating economic situation or potential further sanctions will lead to future losses. Even if sanctions are eventually lifted, fear of a repeat scenario could impair Russia’s access to international capital markets for years to come.

The downgrade of government bonds also has knock-on effects for banks and firms in Russia, as a weaker sovereign rating usually leads to lower ratings for banks and firms as well. This further impairs their access to funding. Fitch, for example, downgraded 13 firms in mid-January, following the downgrade of the Russian government. The strained funding of banks will induce them to tighten lending conditions for companies and households. The most recent bank survey shows that credit standards tightened considerably across the board in the third quarter of 2014, and will have tightened further since then. 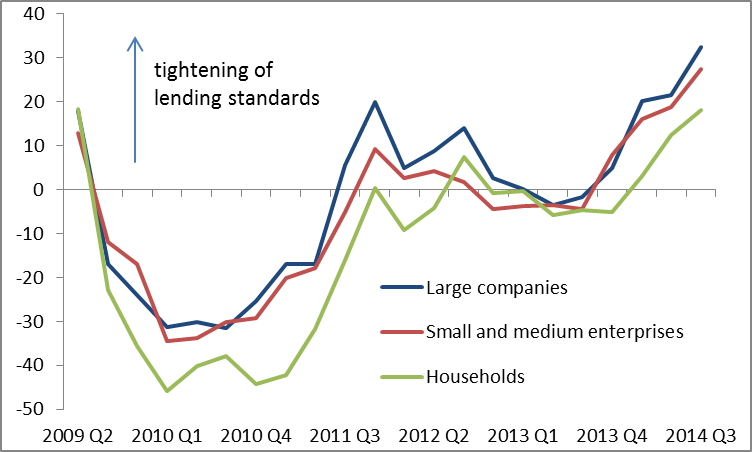 Source: Bank of Russia
Notes: The chart shows the balance of answers of banks to the question of whether they have loosened or tightened credit standards.

The recent stabilisation of the oil price and the rouble gives Russia temporary relief from the acute economic and financial pressures at the end of 2014. But the country’s considerable foreign debt, high inflation and real interest rates, restrictive access to finance for businesses and cuts in public spending, will lead to a long and deep recession. A renewed fall in the oil price and the rouble could lead to intensifying capital flight and the imposition of capital controls. What is more, a further fall in oil revenues for the Russian government and higher inflation, especially in food prices, would lead to steep falls in living standards of ordinary Russians, of whom more than 15 million already live below the poverty line.

A Russian economic collapse on the scale of the late 1980s (also a time of low oil prices and high defence expenditure), would give the West a difficult dilemma. On the one hand, the world cannot afford a failed state with nuclear weapons; and political leaders in the West will be susceptible to arguments that Russia is ‘too big (and dangerous) to fail’. On the other hand, bailing out Russia under any version of its current leadership and system looks very unattractive: as in the 1990s, much of the bail-out money would end up helping the elite both to stay in power and further enrich itself. European policy-makers should be prepared to target support on those parts of the Russian economy that might at some point become the backbone of a stable middle class in Russia – and they should hope that the oil price does not take another deep dive.

Jennifer Rankin contributed to an earlier version of this insight. I am grateful to Ian Bond for guidance on Russian politics.