Euro crisis: In defence of investors

The eurozone’s fiscal position is better than the US and UK, and the crisis-hit members of the currency union are doing more to strengthen their public finances than either of these countries. So why are borrowing costs so much higher for countries in the eurozone periphery than for Britain and America? Portugal and Greece have lower public deficits than the US, so why do investors fear for their solvency, but not that of the US?

These questions are being put with increasing frustration by eurozone economists, from both the public and private sectors, as well as by policy-makers such as Juergen Stark at the European Central Bank. The inference is that investors are judging countries by different standards. Why else would investors continue to lend to the likes of the ‘profligate’ US and UK, but punish countries whose fundamentals are sounder? Such irrational behaviour by investors, it is argued, is unfairly derailing the hard work being done by governments in the eurozone. Are such frustrations justified? 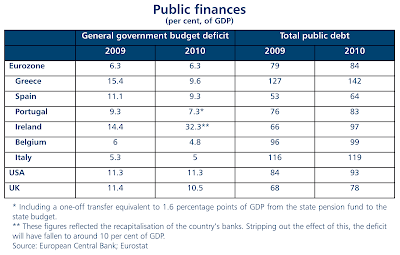 But anything more than a very superficial analysis shows why investors are right to be concerned about the eurozone. First, there is no federal eurozone budget, so the aggregate budget deficit is only of so much interest to investors. Second, it is countries’ ability to service their debts going forward that determines the risk premium demanded by investors, and to a large extent this depends on their economic growth prospects. While the crisis-hit eurozone economies have made more progress in reducing their borrowing than did either the UK or US, this has been at the cost of economic stagnation. Third, sovereign investors are not just concerned about public debt, but levels of private indebtedness too. They fear that if economic growth remains very weak, governments will end up being liable for some of the private debt.

Eurozone economic growth was a respectable enough 1.7 per cent in 2010 (see Table 2). This was well below the US, but about the same as the UK. However, the eurozone figures masked huge differences. Germany, which accounts for a third of the currency union’s GDP, expanded by 3.6 per cent, whereas Greece’s economy contracted steeply and a number of others barely grew. Stripping out Germany, eurozone economic growth was actually just 1 per cent in 2010. Indeed, the eurozone is still a long way from returning to its pre-crisis level of economic activity: in the third quarter of 2010 eurozone GDP was still 3.2 per cent lower than in the first quarter of 2008. This was better than the UK but far worse than the US, whose economy was almost 2 per cent larger in the third quarter of 2010 than at the outset of the downturn. Not only is real GDP in some of the struggling economies still way below their pre-crisis peaks, but there is little chance of them returning to pre-crisis levels any time soon. 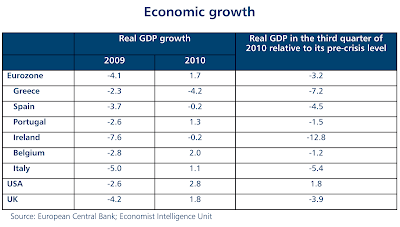 Are investors right to be so pessimistic about the economic growth prospects of the struggling member-states? Yes, because their prospects of economic recovery rest on a strong rise in exports, but the principal way of bringing this about – real devaluation within the eurozone – threatens economic stagnation and rising debt burdens. Because of their membership of the currency union they cannot devalue their currencies, so must reduce their wages and prices relative to their eurozone counterparts. The problem is that this will depress income and lead to deflationary pressures. This, in turn, will make it hard to bring down deficits on a sustained basis (irrespective of how wrenching fiscal austerity is), and will inflate debt servicing costs. A strategy of deflating back to competitiveness might be do-able for an economy with little or no debt, but for the crisis-hit eurozone economies it is high-risk.

Portugal has combined public and private debt of around 320 per cent of GDP. The Portuguese central bank expects real GDP to contract by 1.3 per cent in 2011, while inflation is unlikely to be much more than 1.5 per cent. This implies stagnant nominal GDP (growth in real GDP and inflation). There was much fanfare this week when Portugal successfully sold a modest quantity of government bonds at a yield of 6.7 per cent, but this is a ruinous rate of interest for an economy with Portugal’s prospects. The picture is somewhat better in Spain (hence investors are demanding less of a premium to lend to the Spanish government). Ireland has managed to execute a major internal devaluation within the eurozone, but at the cost of an unprecedented decline in its nominal GDP and an explosion in the country’s debt burden. With Greece’s stock of public debt at 140 per cent of GDP and its economy contracting rapidly, it is hardly surprising that investors have little appetite for Greek bonds.

But what of the structural reforms being pushed through by these countries? Why are investors not taking more account of these? There is no doubt that Spain, Greece and Portugal are now introducing long overdue reforms of their labour markets. These reforms are obviously welcome, and in the long-term should help to boost productivity growth. But a little perspective is needed. Notwithstanding modest moves to free up the markets for professional services in Greece and Portugal, there is little sign of an aggressive drive to open-up these countries’ domestic sectors to more competition. And without such aggressive liberalisation, productivity growth will remain anaemic. Moreover, there are legitimate doubts over the ability of governments to push through an ongoing programme of unpopular reforms when their economies are caught in a cycle of weak economic growth and rising debt burdens. There needs to be light at the end of the tunnel.

What of debt dynamics in the UK and US? Are they not even worse? Both face daunting fiscal challenges and high levels of household indebtedness. And the US at least relies on foreign investors to finance a significant chunk of its budget deficit. But there are several good reasons for investors to be more relaxed about the solvency of the US (and to a somewhat lesser degree, the UK) than the crisis-hit members of the currency union. Unlike their eurozone counterparts, who must rely on deflation to rebalance their economies, the US and UK can rely on currency depreciation to facilitate the necessary adjustment and boost exports. Currency depreciation and very activist central banks in these two countries also ensures that deflation is unlikely to be problem. In addition, both countries have far more flexible product and labour markets than the southern European countries.

In short, the reason why the US and UK can borrow at much lower rates of interest than the similarly indebted members of the eurozone is that the obstacles to economic growth are lower in Britain and America and threat of deflation and mounting social tensions much less acute. Of course, investors could yet take fright if economic recovery in the two countries peters out and their fiscal deficits remain too high. The UK, more than the US, could certainly find itself in this position. But in such a situation, sterling would fall, encouraged no doubt by a further bout of so-called quantitative easing by the Bank of England. And fortunately for the British government, it largely relies on domestic institutional investors to fund its fiscal deficit; this is not so in the case of the currency union’s strugglers.

Unsustainable macroeconomic policies explain investors’ flight from the sovereign debt of the crisis-hit eurozone economies. Until the eurozone demonstrates how the currency union’s peripheral economies are going to avoid stagnation and debt traps, it will be rational for investors to give their sovereign debt a wide berth.

A very crisp and to-the-point explanation.

I would add greater depth/liquidity of debt markets of the UK and US than in the Eurozne as an additional explanatory variable for higher pricing of the former's securities.