Much ado about little: Britain and the EU budget

As almost all European governments are cutting spending, it is hardly a surprise that the EU’s budget is under fire. The European Commission has rather optimistically proposed a real terms increase of five per cent in total spending over the next budget period, which runs from 2014 to 2020. This amounts to 1.05 per cent of projected EU GDP over that period. Most of the countries that pay more into the budget than they get back reject this proposal. Germany and Ireland want the budget limited to one per cent of EU GDP (which means that as Europe’s economies grow, the budget can grow too, but at a slower rate than the Commission wants). However, British Prime Minister David Cameron wants to go further: he has promised to veto anything but a freeze in real terms. It may be difficult to back down from this position in budget negotiations: the opposition Labour party combined with backbench Conservative rebels to win a parliamentary vote last week that called for a cut to the budget, defeating the government. Cameron would be unlikely to get a larger EU budget through the UK’s parliament if he compromises at the summit, on November 22nd.

Britain is not the only budget hawk: Sweden and the Netherlands have also demanded big cuts to the Commission’s proposal. But neither has demanded a freeze. The UK is likely to be further isolated in Europe, after its veto of the fiscal compact in December last year, if Cameron refuses to compromise. Amid the politicking over the size of the total budget, Westminster has paid little attention to the potential costs to the Exchequer of the proposals on the negotiating table, and how much extra the UK could pay. This note offers some answers, and in doing so allows us to judge whether UK obduracy is likely to achieve very much.

How much does the UK currently pay, and how much does it receive?
As a comparatively rich country with a small agricultural sector, the UK has in recent years been a net contributor to the EU budget. The UK passes tax revenue to Brussels, and receives less expenditure in the form of Common Agricultural Policy (CAP) payments, regional development funds, and other transfers in return. But it has a rebate from Brussels – a reduction in its contributions negotiated by Margaret Thatcher in 1984, which many other EU countries consider to be unfair now that Britain is one of the richer members of the club.

Britain’s net contribution is how much it pays in, less how much it receives back, in EU spending and the rebate. In most budget negotiations, British governments try to reduce wasteful and iniquitous farm spending and the size of the budget, and protect the rebate. Tony Blair’s 2005 agreement to cut the rebate to help pay for the costs of EU enlargement is the exception that proves the rule: even Blair, a pro-European prime minister at the height of his power, did so reluctantly, and fought hard for CAP reform.

Given that any country can veto the EU budget, member-states must build alliances to succeed. The UK is isolated after its veto of the fiscal treaty, and so would do well to be cautious if it wants to reduce spending. Britain wants the budget frozen at its 2011 level. But if the talks collapse, which is a distinct possibility, the 2013 budget will simply be rolled over to 2014, but with inflation added. The budget would end up far larger than 2011.

If the UK really wanted to cut wasteful spending and promote growth, it could accept the German proposal for a budget capped at one per cent of EU GDP, in exchange for cuts to the CAP and a transfer of that money into infrastructure and regional development spending. France has threatened to veto any budget that does so, but they could be isolated if Britain were prepared to make concessions, which President Hollande may wish to avoid, given the difficult negotiations over the euro.

But such a deal may be difficult for Cameron, who has chosen to make budget cuts his priority. The UK’s net contribution grew by three-quarters between 2006 and 2012, from £3.9 billion to £7.4 billion (€4.8 to €9.2 billion). The UK’s transfers to Brussels were low in 2008 and 2009 because it suffered a larger recession than other member-states, and in 2010 and 2011 payments were larger because its economy made a (small) recovery. On the expenditure side of the ledger, European Social Fund and Regional Development Fund spending in the UK is falling over time. These funds provide support for struggling regions with an income less than three-quarters of the EU average. Over the course of the last budget, Brussels has phased in the poorer newer members in Central and Eastern Europe, so that a greater proportion of structural funds go to these countries. These two factors explain most of the rise in the UK’s net contribution.

As regional funding has declined, agricultural payments have become the large majority of EU spending in Britain. This change in the composition of spending explains why Cameron is in a difficult negotiating position. Switching money from the CAP to regional spending would mean that the UK’s net contribution would rise, as fewer regional funds are disbursed in Britain, thanks to enlargement. If Cameron were to try to offer up more of the rebate to convince France to reform the CAP, the UK’s net contribution would rise even further. Thus, Cameron can either try to limit the UK’s contribution to the EU or try to improve what it is spent on. The best policy would be the latter, but the best politics – at least in domestic terms – is the former.

How much could the UK contribute to the next budget?
Britain’s net contribution to the next budget will not be decided before the negotiations at the summit in late November – and quite possibly not even then. But we can make some assumptions about how much more the British taxpayer might end up paying. The UK’s fiscal watchdog, the Office of Budget Responsibility, assumes that the UK net contribution is going to stay at around the 2012 level as a percentage of the total EU budget – five per cent. This seems right, for the following reasons. The UK is unlikely to give up or reduce its rebate. British economic growth is projected to be around the EU average: if it grew faster than other countries, the budget arithmetic would mean it would become a bigger net contributor. Finally, regional development funding is not coming back to the UK: Central and Eastern Europe will remain poorer than Western Europe between now and 2020. Given that the UK contribution should stay at around the same level, as a proportion of the total budget, we can then project forward how much it is likely to contribute, given the three main proposals on the table.

* A budget freeze (UK proposal: the British Parliament’s vote for a cut is only advisory, and this remains the UK government’s position)
* A budget capped at one per cent of EU GDP (the German position)
* A five per cent increase in the budget, as a proportion of EU GDP, to 1.05 per cent (the Commission proposal)


The UK government’s position implies a continued UK net contribution of around £7.4 billion (€9.2 billion). The German government’s proposal would mean the UK paying slightly more – an average of £400 million (€499 million) a year over the budget period. The Commission’s proposal would see the UK contribution grow, in tandem with Europe’s economic growth. So, under the Commission’s proposal, the UK’s net contribution would grow from £7.4 to £8.2 billion (€9.1 to €10.2 billion), an average of £550 million per year (€690 million) higher than under the UK proposal. This would mean a total increase, above the UK’s proposal, of £3.9 billion (€4.8 billion) over the seven years. (See chart). 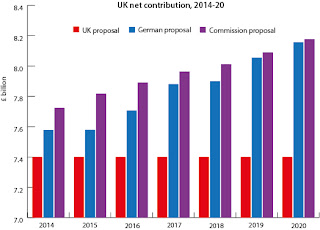 Source: author’s calculations, based upon the GDP and budget projections in European Commission, ‘Proposal for a Council regulation laying down the multiannual financial framework for the years 2014-2020’, (2011) p. 20.

These numbers are difficult to appraise without context. Under either Germany’s proposal, or the Commission’s, the UK could end up paying around £400 and £550 million per year more, at most. This is around 0.03 per cent of GDP. It is the same amount that England and Wales spend each year on flood and coastal defences, or the same size as Oxfordshire County Council’s budget.

Furthermore, Britain’s hand is weakened, because of the rebate. It is difficult for Cameron to build consensus for either an overall freeze to the budget, or a cut to the CAP, because of it. Britain's net contribution is smaller than other big EU countries. Germany is the largest net contributor, followed by France and then Italy. The UK is the fourth largest, despite being both richer and larger than Italy. If Cameron brought down the negotiations over such a small sum, the UK would find itself pressed further into the margins of Europe. It would do better to compromise on the overall size of the budget, and negotiate for it to be spent more wisely.

John Springford is a research fellow at the Centre for European Reform.

Posted by Centre for European Reform at 1:11 pm

Can't remember where I saw it, but isn't part of the problem with lower regional policy spending in the UK that the UK government is cutting its own contributions to projects where half of the funding comes from the EU budget?

With no UK funding the EU funding can't be used and projects have to close even though the money was already committed?