Britain is held back by its business culture, not the EU

British ministers like to talk of the British economy being in a ‘global race’, and of the need for their countrymen to shape up and raise their game if they are to compete in the global economy. In practice, they mean less red tape, tax cuts for business, and reforms aimed at making it easier to hire and fire employees. Many Conservatives blame the regulatory burden on the EU, and want to either renegotiate the terms of Britain’s membership or withdraw altogether. With the notable exception of Liberal Democrat Business Secretary, Vince Cable, these ministers never mention business short-termism, and the British system of corporate governance that encourages it. Yet this is undoubtedly the most important reason for the UK now having the second lowest investment rate in the OECD (after Ireland, where investment is very volatile). The government wants to rebalance the UK economy towards investment and exports. This will require a reform of corporate governance, especially the incentives faced by executives. 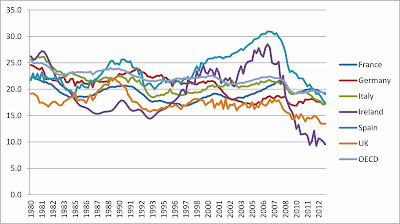 British ‘short-termism’ has long been blamed for the country’s low levels of investment, especially in manufacturing where success requires long-term commitment to product development and distribution as well as to training. The issue received less attention during the boom years when debt-fuelled private consumption and (towards the end) deficit spending by government drove growth, but it hardly went away. There is no perfect correlation between the level of investment and the rate of economic growth – too much investment can be wasteful and unproductive, as was the case in Ireland and Spain in the run-up to the crisis. But Britain’s investment rate is clearly damagingly low. The country’s corporate sector became a net saver in 2002, and hence long before the onset of economic crisis. Profits have risen and investment has fallen, as the corporate sector – in a reversal of the normal order of things – has become a large creditor to the rest of the economy.

Why is this such a problem? If firms invest too little, a country’s capital stock suffers and with it productivity growth, trade competitiveness and overall economic performance. Moreover, if the corporate sector is a net saver (that is, it spends less than it earns), other parts of the economy – households and the government – must spend more than they earn, or the economy will slump. The only way the economy can grow if households, firms and the government are all saving simultaneously is if net exports are consistently positive (exports grow more rapidly than imports). The British economy is now growing relatively strongly, propelled largely by declining household savings and a resurgent housing market (which could presage another boom and bust). There is no sign, however, of a rebound in investment.

Despite having one of the lowest investment rates in the OECD prior to the crisis, the UK experienced one of biggest declines in 2008-09 and one of the weakest recoveries since. While public investment only fell slightly, business investment collapsed and is still more than 30 per cent below pre-crisis levels. Cuts in corporate taxation and regulation are unlikely to spur a recovery in investment, as the government hopes. The tax treatment of capital spending is less generous in the UK than in some EU countries, but business taxes are lower than the average. There is little doubt that certain types of regulation are a deterrent to investment, but it is hard to argue that regulation explains lower levels of investment in the UK than in other EU countries. After all, Britain is already lightly regulated, according to the OECD and the World Bank. Patchy infrastructure and skills shortages may be deterring some firms from investing, but these problems are hardly unique to the UK, and they are certainly not preventing companies from delivering healthy profits; profit margins remain well above their long-term average.

The British government is ignoring a pair of elephants in the room. The first is the fall in the proportion of national income accounted for by wages and salaries (labour share). The fall in labour share is the flipside of the rising proportion of national income accounted for by profits. Labour share has fallen in the UK, as it has done elsewhere, and is undoubtedly one reason for the weakness of consumption and investment in the UK. The British government (like its counterparts across Europe) believes that demand is profit-led as opposed to wage-led; that is, they believe that the higher corporate profits are, the more likely corporates are to invest. The fact that a rising profit share over the last thirty years has gone hand on hand with a steady decline in investment strongly suggests otherwise. (See http://www.cer.org.uk/publications/archive/policy-brief/2012/economic-recovery-requires-better-deal-labour).

Reversing the decline in labour share will be difficult, even if governments acknowledge that it is a problem. It partly reflects technological change, for example, which governments should not try to resist. But governments do not have to compound the problem. For example, the UK government continues to shift the burden of taxation from firms to households, and favours labour market reforms which further erode the bargaining power of employees. However, labour share is even lower in many eurozone countries where investment rates are higher, so there must be another reason for the particular weakness of British investment.

This leads to the second elephant in the room: a system of corporate governance (in particular, executive remuneration) that gives managers little incentive to sign off on long-term investment. A major reason for this is the mantra of ‘shareholder value’ which has gone further in the UK than anywhere else in Europe. Executive remuneration (in particular, bonuses) is tied more closely to short-term profits than elsewhere. The result is a strong incentive to prioritise short-term profits or returns on equity over long-term investment and organic growth. Non-financial UK corporates are now sitting on unprecedented cash holdings, currently around £700 billion (up from £240 billion in 2002), equivalent to almost 50 per cent of GDP. No other major European economy has seen so much money essentially being sucked out of the economy. If the UK is to flourish, companies must start investing this money. However, executives have a personal interest in boosting short-term share prices by using the cash to buy back shares and boost dividends, rather than stepping up investment in the businesses they run.

Advocates of untrammelled shareholder value base their support on two key arguments. First, it benefits everyone because it forces managers to run firms efficiently rather than for themselves. Second, it makes it easier to reallocate capital from declining to fast growing industries; the owners of capital do not have to engage in time-consuming and expensive negotiations with workers or other stakeholders before withdrawing their capital and putting it to more productive use.

Neither of these arguments is convincing, at least from a UK perspective. First, the prioritisation of short-term returns and the drive to give money back to shareholders wherever possible may well be in the interests of managers and fund managers (because of the way their remuneration is structured). But it is far from clear that it is in the interests of the workers, suppliers and the broader economy, or of the ultimate owners of company shares (ordinary employees through their pension funds). Their interests are in long-term profits and long-term share values.

Second, if capital was moving more quickly from declining to dynamic sectors in the UK than elsewhere in Europe, the UK’s mediocre productivity performance would be much better than it is, and GDP per head higher (see chart 2). The innovative capacity of the British economy would also be stronger. R&D spending is an imperfect measure of innovation – it fails to capture innovation in the services sector, for example. But even allowing for this, the UK’s R&D performance is poor: at just 1.8 per cent of GDP it is lower than the already poor EU average of 2 per cent. As befits a country with the strongest scientific research base in Europe, there are plenty of high-tech start-ups in the UK. But few have grown into large firms (most suffocate in the so-called ‘valley of death’), suggesting that Britain’s financial system is pretty poor at allocating capital. 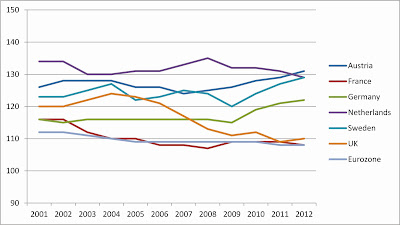 Their focus on rebalancing the economy means that British ministers are now more aware of the importance of long-term investment by firms. They no longer try to convince the rest of the EU of the merits of unfettered shareholder value. But this has not been translated into institutional changes in the UK. Executive pay and bonuses (and those of fund managers) need to be more closely linked to long-term performance, and not just to the share price; a range of metrics is needed. Executives’ duty should be to the long-term performance of the company and those that work for it. At the same time, the government needs to make it financially attractive for investors to hold company shares for longer periods (that is, encourage investing over trading) and to take bigger stakes in companies. Together this would give investors an interest in making sure companies invest enough to maximise their competitive advantages and sufficient leverage to intervene if they fail to so; at present, ownership of listed British firms is highly dispersed, and shares are being held for shorter and shorter periods.

Britain’s biggest competitiveness problem is entirely home grown. Corporate governance is an unsexy and complex subject, and plenty of powerful interests have an incentive in prolonging the status quo. But if the government is serious about lifting investment rates, it cannot simply ignore the issue. If it does, its pleas for more long-term thinking and investment will start to ring hollow.