When the UK was considering euro membership, former chancellor Gordon Brown suggested five criteria that needed to be met. The first, and arguably most important, concerned interest rates. Specifically, he said economies of the eurozone needed to be sufficiently compatible to live with common eurozone interest rates on a permanent basis. The recent crisis suggests they were not. The main underlying reason is that real interest rates, that is, the interest rates after adjusting for inflation, can diverge quite drastically in a monetary union – and unfortunately in the wrong direction, thereby amplifying boom and bust cycles. This is especially true in a diverse and decentralised monetary union like the eurozone. Fiscal and regulatory policies need to work aggressively against this phenomenon, to ensure countries grow steadily without protracted booms or slumps. Before the crisis, the eurozone clearly failed on this account. Today it continues to do too little to avoid such harmful divergence, which points to a period of low and uneven growth in the eurozone.

Chart one: The difference between real interest rates for German and Spanish governments 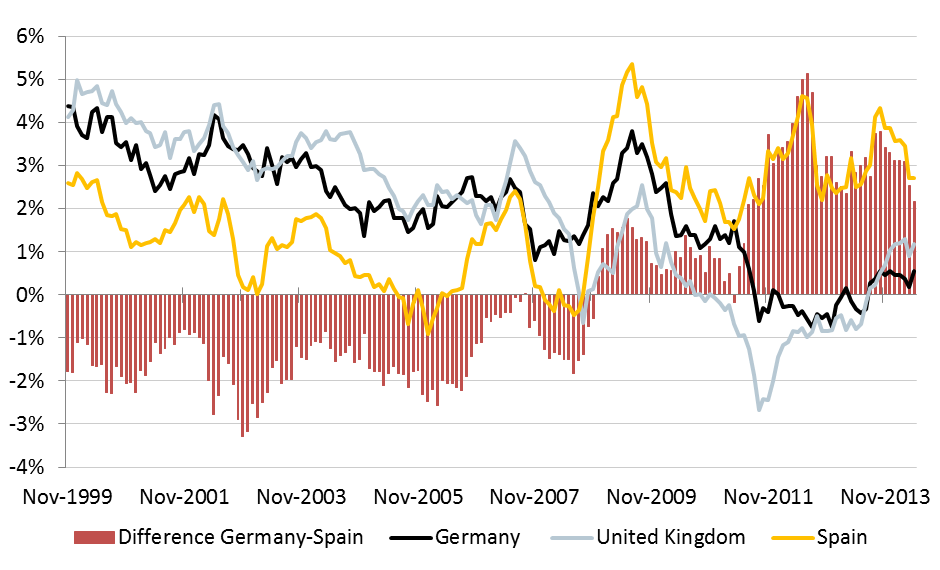 Spain in the early 2000s is a case in point: the more the economy boomed and the more inflation rose, the lower real interest rates became (see charts). This stimulated the economy further, as low interest rates made investment (for instance in real estate) more worthwhile. Since there was no national Spanish interest rate but a eurozone one, such self-reinforcing dynamics played out almost uncontested – until the crash. In Germany, with low inflation and growth in the first half of the 2000s, the opposite was the case: low inflation led to high real interest rates. Thus, the economy was further weakened at a time when it needed stimulus, prolonging the period of subpar growth. Now the pattern is reversed, Spain has experienced a depression and struggles to recover while Germany is growing. Real interest rates show the same upside-down pattern: Spain’s real interest rates are significantly above Germany’s, crippling a recovery in Spain while low real rates in Germany potentially stimulate its already robust economy further. 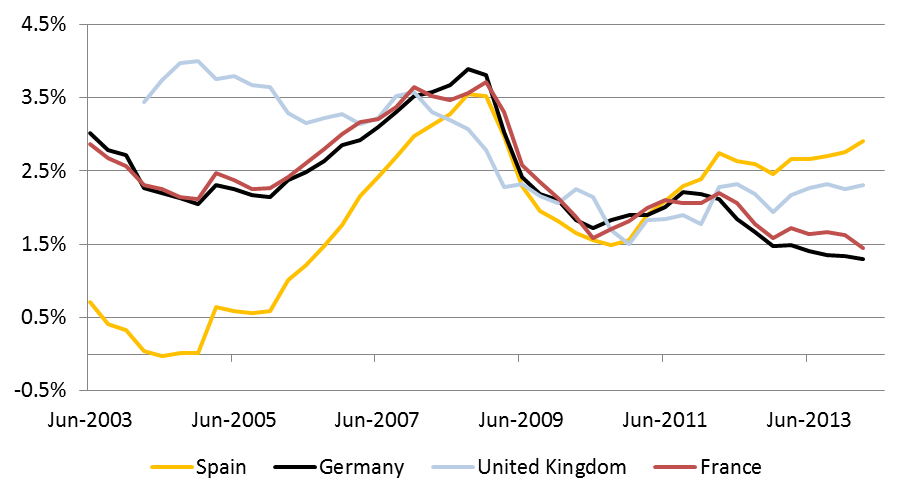 Divergent real interest rates are a natural phenomenon in a monetary union. The policy response to them is not: fiscal and regulatory policies need to be used aggressively in order to counteract the negative effects of this upside-down divergence – especially in a decentralised monetary union like the eurozone where there are no automated fiscal transfers. In a boom, fiscal policy needs to be very restrictive – Spain’s surpluses before the crisis were not large enough. Financial regulation should make lending more expensive in booming countries, thus effectively increasing interest rates for businesses and consumers there. At the same time, eurozone member-states that are in recession or only growing slowly need to be able to use fiscal stimulus to counteract the negative effects of higher real interest rates. Financial regulation should facilitate lending in these countries.

Unfortunately, the eurozone is not drawing the right conclusions. Most countries are consolidating their budgets during a period of low growth and inflation, instead of counteracting the drag from high real interest rates. For the future of eurozone growth, that means too high real interest rates will continue to weigh on countries like Spain, Italy and even France. The verdict on German fiscal policy is still out, given that Germany has yet to boom.

Likewise, regulatory policies are not being used to lower interest rates in countries in recession or stagnation, and to tighten standards in the booming parts. The reason is not a policy failure by regulators – they stand ready to counteract booms, certainly more so than in the past. The failure lies with the ECB and the overall fiscal policy in the eurozone. Both have prevented the eurozone from growing at a sufficient level by being too cautious (ECB) or outright restrictive (fiscal policy). Ideally, the overall fiscal and monetary policy stance should raise average growth and inflation to an appropriate level. Regulatory policies could then curtail a lending spree in the booming parts that enjoy too low real interest rates while facilitating lower real interest rates in sluggish economies.

Finally, the financial sector is adding to the divergence in real interest rates: banks and, more importantly, firms have to pay a premium on borrowed money for the simple fact of being in, say, Italy. This is because financial risk after the crisis is still attached to the government of the state where the bank or firm is located. The European banking union was supposed to bring an end to this ‘country risk’ but it has so far only partially succeeded: in the event of a major crisis, German banks will still be perceived as safer, reducing their borrowing costs now, and vice versa for Italian or Spanish banks. Thus, some country risk will remain for the coming years. As the cruel logic of a crisis mandates, this country risk adds to the real interest rates in the worst-affected countries, worsening the macroeconomic dynamic outlined above.

For the growth prospects of the eurozone, in particular those countries currently growing slowly, this has important implications. While diverging real interest rates are a common feature of a decentralised monetary union, fiscal, regulatory and monetary policy play an important part in counteracting their upside-down dynamic. But as long as eurozone fiscal and monetary policy does not change to support growth, and inflation remains very low as a result, real interest rates in the South will remain high – too high for a meaningful recovery. The recent news on a stalling recovery should come as no surprise.