How Brussels' medicine is killing the ‘French patient’

The French government’s announcement in early September that France would fail to bring its deficit below 3 per cent of GDP until 2017 was met with the usual mixture of frustration and resignation. Many eurozone policy-makers see France’s refusal to play by the fiscal rules and its inability to reform its economy as the biggest threat to the eurozone’s stability. The list of allegations is pretty comprehensive: a bloated state, a lack of competitiveness, intractable structural problems and a mulish refusal to reform or to acknowledge that globalisation has left France living on borrowed time.

Some of these criticisms have merit, but as a whole they form little more than a caricature. France has some supply-side problems: very high non-wage labour costs deter employment; and parts of the service sector urgently need an injection of competition. But these are secondary to those of its problems that stem from self-defeating austerity and chronically weak domestic demand elsewhere in the eurozone. Without change to the latter France could yet come to justify the ‘sick man of Europe’ tag so beloved of journalists.

How does the performance of the French economy stack up against its European contemporaries? France has certainly struggled since the financial crisis, along with the rest of the eurozone (with the partial exception of Germany). However, its growth performance has been nowhere near as bad as either Spain’s or Italy’s and, until recently, it has been better than the UK’s (see chart 1). And France’s record since 1999 has been rather good compared with many of its European peers. So much for past performance. Are critics of France (led by the European Commission and the German government) justified? Are they right to be so pessimistic about the country’s future and correct in the medicine they prescribe for it? 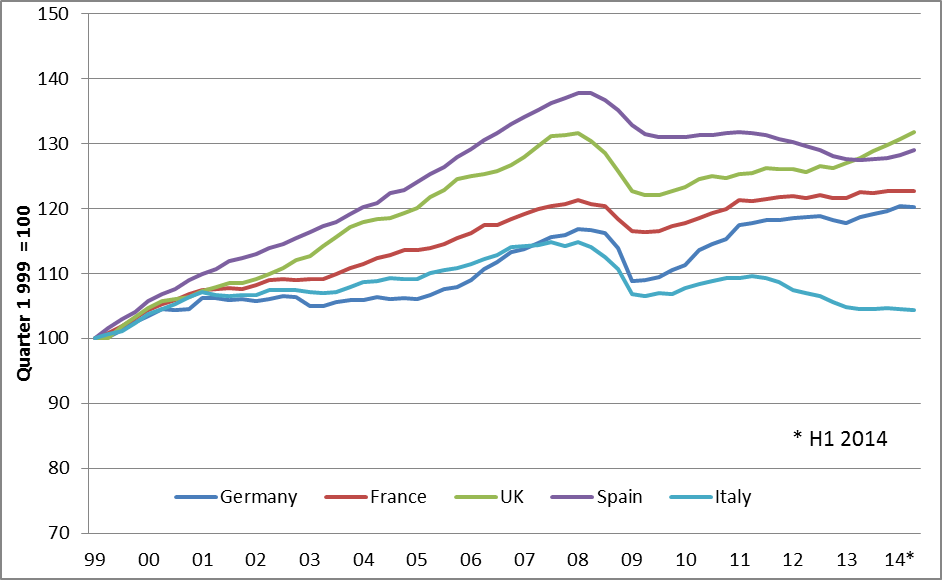 France certainly has a big state. Public spending stood at almost 57 per cent of GDP in 2012, higher even than in Sweden (see chart 2). There is little doubt that this is excessive, but France’s productivity levels (which are better than Germany’s and not far short of US levels) would not be so high if its large state sector was unproductive. Nor does the country’s big state appear to squeeze out private sector investment, which is about the same level as in Germany, Spain and Italy and much higher than in the UK (see chart 3). Moreover, putting together comparable data for the size of state sectors is far from straightforward. For example, spending by France’s state-owned rail operator (SNCF) counts as state spending, whereas spending by Britain’s (or Germany’s) nominally privatised railways does not. France could follow suit and sell off its railways, but it is far from clear that this would improve the quality of rail services or reduce the public’s liabilities. 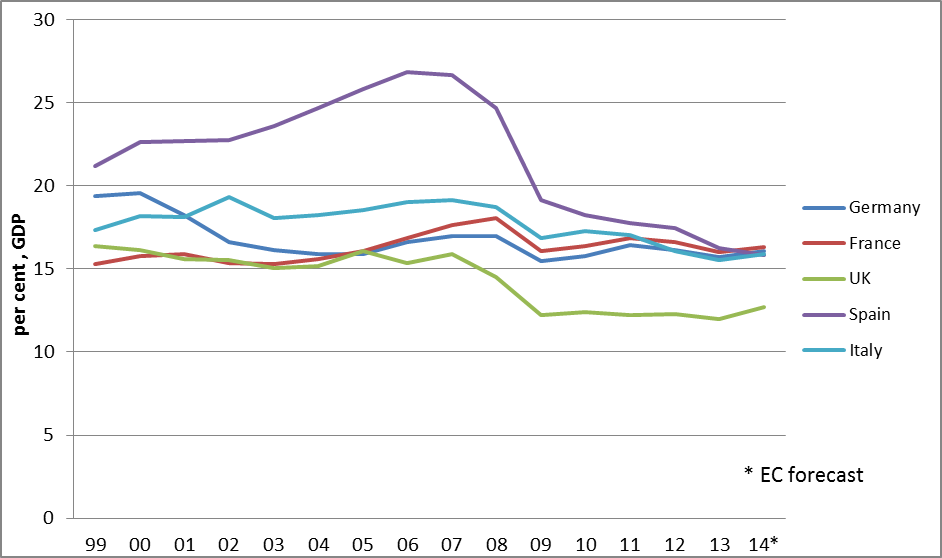 France’s general government budget deficit is sizeable (see chart 4), though much lower than Spain’s or the UK’s. Moreover, a sizeable chunk of the French deficit is down to much higher public investment than in the other big EU economies, and more generous childcare. For example, were French public investment as low as Germany’s, France would have no problem getting its fiscal deficit under 3 per cent of GDP. And generous childcare provision may help explain why France has the highest birth rate in the EU after Ireland. This could look like money well spent in a few years when populations start to age rapidly in many other EU countries, notably Germany and Italy. 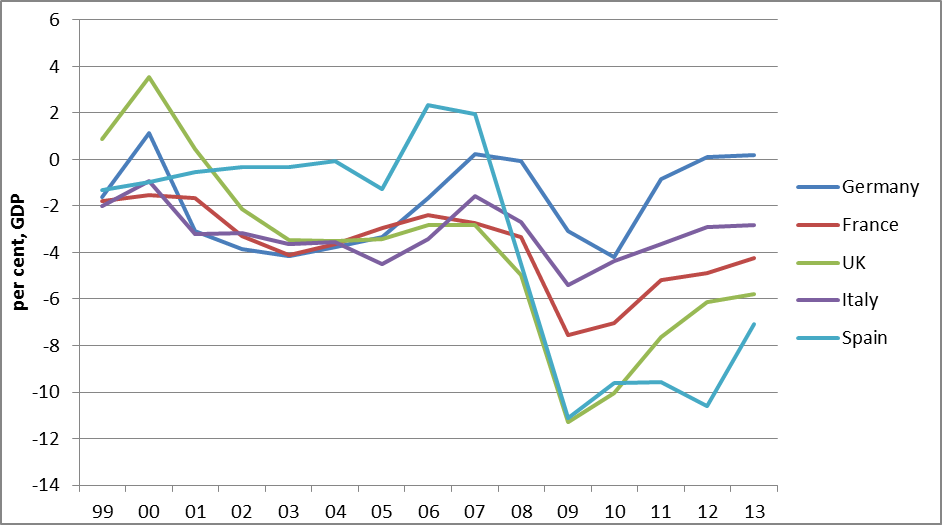 Is France really as uncompetitive as all that? The country’s share of world export markets has certainly fallen steadily over the last 15 years, but no faster than in other G7 economies, with the notable exception of Germany (see chart 5). France’s exports (like those of other G7 countries) have risen considerably but their share of the total has fallen as China and other big emerging economies have entered the global trading system. Germany has bucked this trend, but this is hardly a strategy all can emulate: if more countries become fully participating members of the trade system, Western countries’ overall share must inevitably fall. 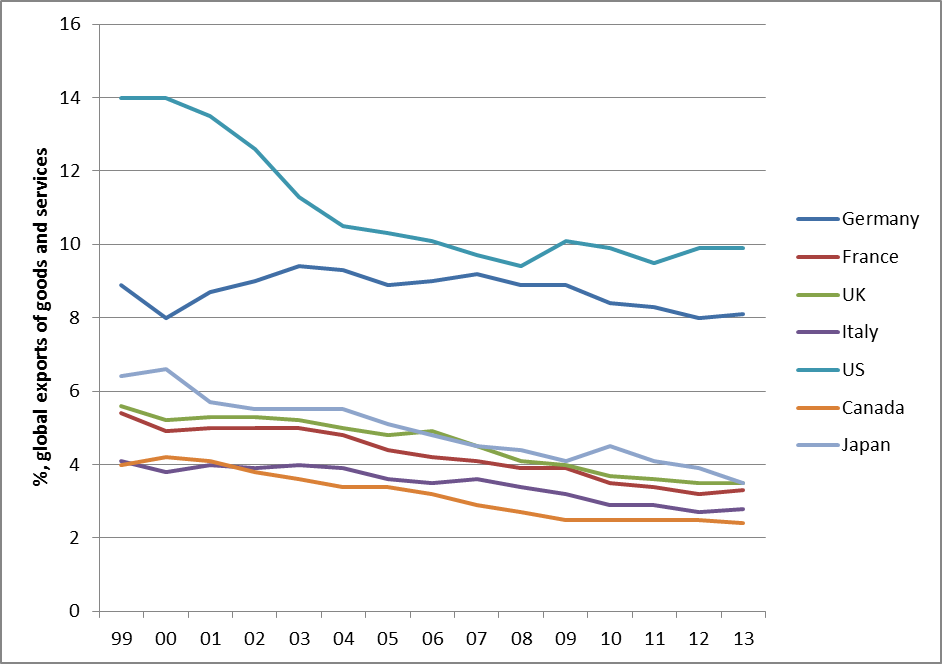 France has run small current account deficits for much of the last decade (see chart 6). The principal reason is that domestic demand rose almost twice as fast in France in the 1999-2013 period as it did in the eurozone, with Germany accounting for much of the weakness of eurozone domestic demand. Persistent weakness in Germany – France’s biggest single export market – has been a continuing problem for French exporters. And while German domestic demand has strengthened gradually since 2010, this has been eclipsed by a much bigger combined fall in Italian and Spanish domestic demand, two of France’s other major export destinations. 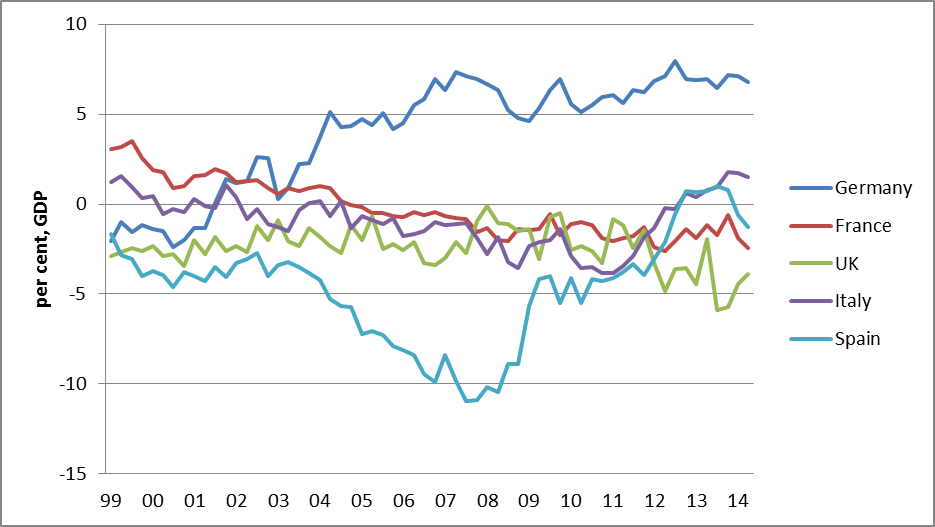 Which brings us onto the second reason for the deterioration in France’s trade performance: French exporters’ loss of competitiveness vis-à-vis their German counterparts. This has not come about because French costs have risen too rapidly (see chart 7), but as a result of prolonged wage restraint in Germany, where wages have lagged behind productivity growth. This was initially the product of a depressed German economy and then of structural changes in the German labour markets brought about by the so-called Hartz IV reforms introduced in January 2005.  German wage settlements have picked up a bit over the last year, but not by enough to make a dent in the gap that has opened up since the introduction of the euro.

Critics of France are on firmer ground when it comes to the supply-side of the French economy. Although France’s productivity levels are impressive, there are some significant structural problems. The first is that French unemployment is higher than it should be given the country’s growth performance and moderate wage growth (see chart 8). One reason is that the costs of financing social benefits are loaded too heavily onto employers, pushing up the cost of hiring people. Another is the inflexibility of labour contracts, which can deter employment. Successive French governments have introduced reforms to address these issues, such as reducing the cost of social insurance paid by employers, but more will need to be done, in particular to reduce the costs of employing low-skilled people. 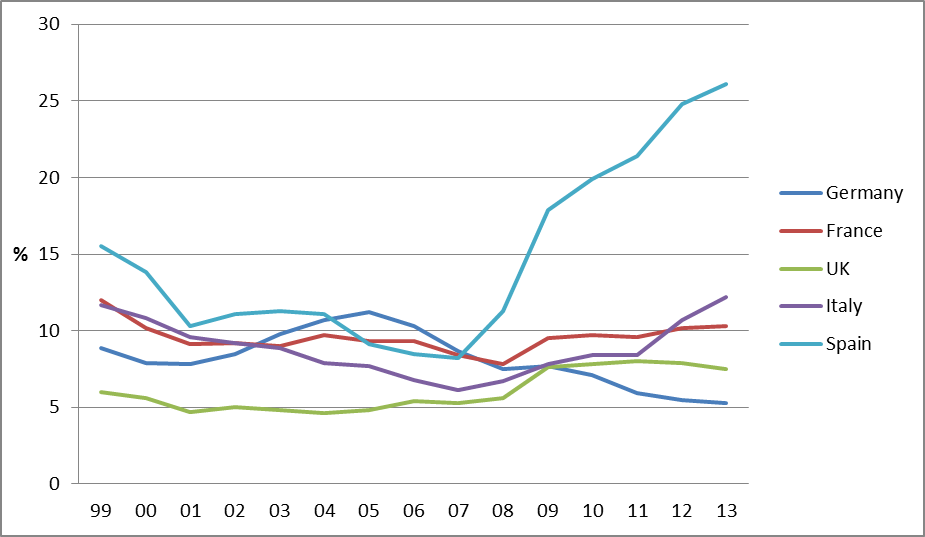 France also requires reform of various service industries. IMF data for total factor productivity – a measure of the efficiency of all inputs into the production process – suggest that the biggest problems lie in sectors such as accounting, legal services, insurance and logistics. The lack of competition and barriers to entry in these sectors mean that costs are higher than they should be, hitting overall business competitiveness.

To recap, the French economy is in trouble. It has barely grown for the last two years and unemployment is stuck at near record levels. But France has performed pretty well in a eurozone context. It stacks up favourably not only compared with the currency union’s periphery but also with the likes of the Netherlands and Finland. France’s supply-side problems are no doubt significant, but do not justify its status as some kind of hopeless case. They are certainly not as serious as those faced by Italy, and arguably no worse overall than those of Germany and the UK, although they are in different areas. Nor will France’s economic prospects be improved by adhering to the European Commission’s calls for austerity, wage restraint and labour market reforms which, if heeded, would exacerbate unemployment.

Since 2012 France has tightened fiscal policy considerably in a largely unsuccessful attempt to bring down its deficit. This failure was foreseen: the IMF has demonstrated that the so-called fiscal multipliers (the impact of changes in government spending on economic activity) are very large in today’s depressed European economic environment. Although spending has been cut, the resulting weakening of economic activity (and hence inflation) has meant that the deficit has fallen little. A long-term objective for the French government should be to reduce the ratio of government spending to GDP, but this can only happen once the economy is growing again. Further cuts to public spending now would further damage the economy by causing even competitive firms to go under and eroding physical and social infrastructure, for example by pushing more people into long-term unemployment.

Wage growth has fallen sharply in France as high unemployment has undercut private employees’ bargaining power and public sector wage freezes have come into force. However, such wage restraint has had little impact on the price competitiveness of French exports, because French wage restraint has been exceeded by the likes of Spain and Italy and matched by Germany. Even if France could depress wages relative to other eurozone economies, it would take a long time for that to bring about a big boost to France’s economy because exports account for less than 30 per cent of French GDP (as opposed to 40 per cent in Germany in the early 2000s, or over 100 per cent in Ireland today). In addition, further wage restraint would depress household consumption and prove a zero-sum game in terms of export competitiveness since Italy and Spain are attempting the same thing. It would also exacerbate deflationary pressures in the French economy and across the eurozone (see chart 9). Rather than cuts in its own wages, what France desperately needs is a sustained recovery in German wages (and with it, German domestic demand). 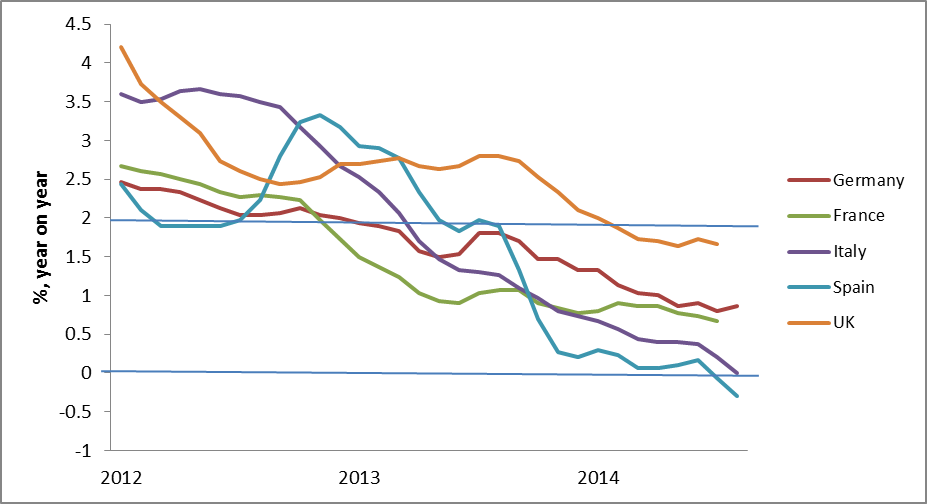 The French government should certainly push ahead with structural reforms of its economy, but not necessarily those prescribed by the European Commission. When demand is very weak and firms do not need to hire workers, reducing social protection and wages increases unemployment rather than reducing it, and depresses consumption. However, France should reduce the burden of taxation from labour and transfer more of it to wealth, property and carbon consumption. And it should open up the country’s non-tradable services sector to greater competition. But even structural reforms of this kind will do little to increase economic growth without a change to fiscal policy, aggressive measures by the ECB to reflate the eurozone economy as a whole and concerted action by the German government to rebalance Germany’s economy.

France is not the ‘sick man of Europe’, but it is certainly ailing thanks to the medicine prescribed by Brussels and Berlin. The French government needs to step up its resistance. Indeed, perhaps the most serious charge that can be laid at France’s door is that it has meekly gone along with a eurozone policy doctrine that has done so much damage to the French economy rather than corralling opposition to it and forcing through a change in direction.

Really excellent article on Brussels medicine and the French patient.Spot on.