Two years ago the British economy was performing in line with the eurozone’s. Since then, it has grown rapidly and the country’s Office for National Statistics (ONS) has announced that the 2008-9 recession was shallower than previously thought (see chart 1). Over this period, the eurozone economy has stagnated, leading to a big gap in growth rates. Indeed, the UK has now performed better since the first quarter of 2008 than Germany, the eurozone’s supposed ‘star performer’, let alone the eurozone as a whole. Is this superior performance likely to continue? And what will it mean for the UK’s relations with the eurozone and its membership of the EU?

The UK suffered one of the biggest economic shocks of any member of the EU in 2008. The crisis led to a large contraction in financial and business services, a major industry in the UK: Britain faced one of the biggest banking sector crises of any EU country, with the government having to provide unprecedented support to crippled financial institutions. How has the UK done not only much better than comparably hard-hit eurozone economies, but also better than less hard-hit ones? 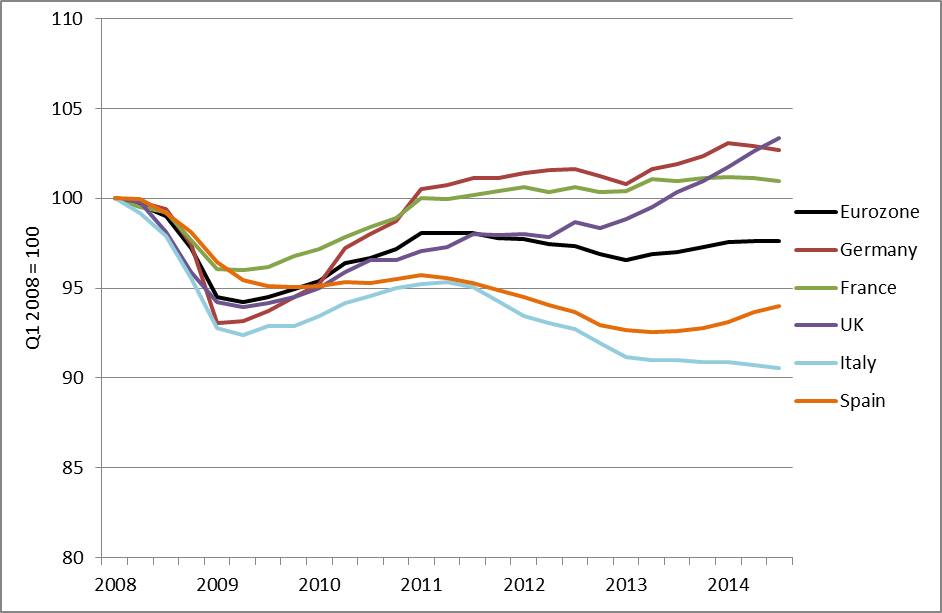 The principal reason for the UK’s outperformance is macroeconomic policy. First, Britain has imposed less austerity than other hard-hit members of the euro. The UK’s coalition government has talked tough on the need for austerity but since 2012 has eased up considerably; in 2014 fiscal policy has boosted growth slightly. The UK’s structural deficit – the government’s deficit adjusted for the economic cycle – is on course to rise this year and is now the highest in the EU (see chart 2). Second, the Bank of England has pursued a much more expansionary monetary policy than the ECB. It cut interest rates faster and more aggressively than the eurozone’s central bank and has held them at record low levels first in the face of higher than target inflation and more recently against the backdrop of a recovering economy. The Bank of England also launched quantitative easing in 2009, which succeeded in stimulating the economy. 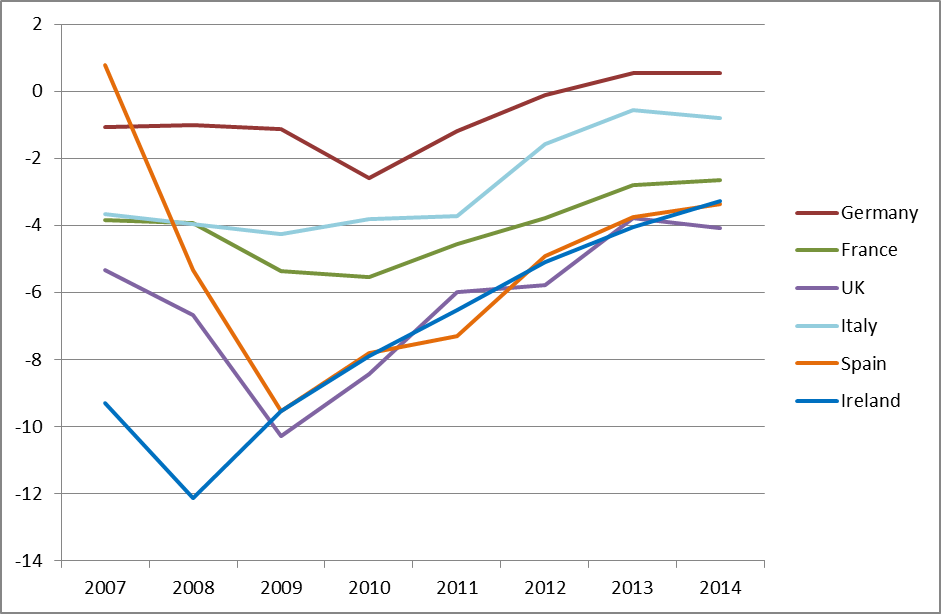 A number of other factors have no doubt contributed to the UK’s stronger performance. Crucially, the British government moved quickly to clean up the country’s banks, taking stakes in the hardest-hit and winding up others. Partly as a result, credit growth has not been as weak as elsewhere. And timely action to recapitalise the banking system means that British banks are in a better place to respond to increased demand for credit than those in many eurozone economies.

The structure of the UK labour market has no doubt contributed to the relative resilience of private consumption. After the crisis, unemployment rose less than one might expect, given the steep drop in output. There appears to have been a number of reasons for this: firms were loath to let go hard to replace skilled workers, businesses slashed labour-replacing capital investment; and a large number of workers moved from full to part-time work. This helped prevent the huge increases in unemployment and hence collapse in consumer demand (and investment) seen in parts of the eurozone.

The surprisingly strong rebound in house prices does not seem to be having much of an impact on economic growth.  A strong housing market can boost consumption as home-owners borrow against the rising value of their homes or run down their savings (believing that the rising value of their homes cushions them from future risks to their income.) But there is little equity release taking place and house price inflation is heavily concentrated in London; prices across much of the country remain pretty depressed.

Finally, the weakening of sterling in the wake of the crisis has not enabled the UK to steal a march on the eurozone by virtue of having a cheap currency. Sterling fell from €1.50 in January 2007 to a low of €1.09 in January 2009, before recovering steadily to €1.27 in October 2014. At such, it is not undervalued relative to its long-term trend, trading at around the level it was at just prior to its ejection from the European Exchange Rate Mechanism (ERM) in 1992 (see chart 3). Secondly, Britain’s trade deficit with the eurozone has ballooned since the beginning of 2008 as growth in British domestic demand has outpaced that of the eurozone. The UK is certainly not guilty of ‘beggaring’ the eurozone: quite the reverse. 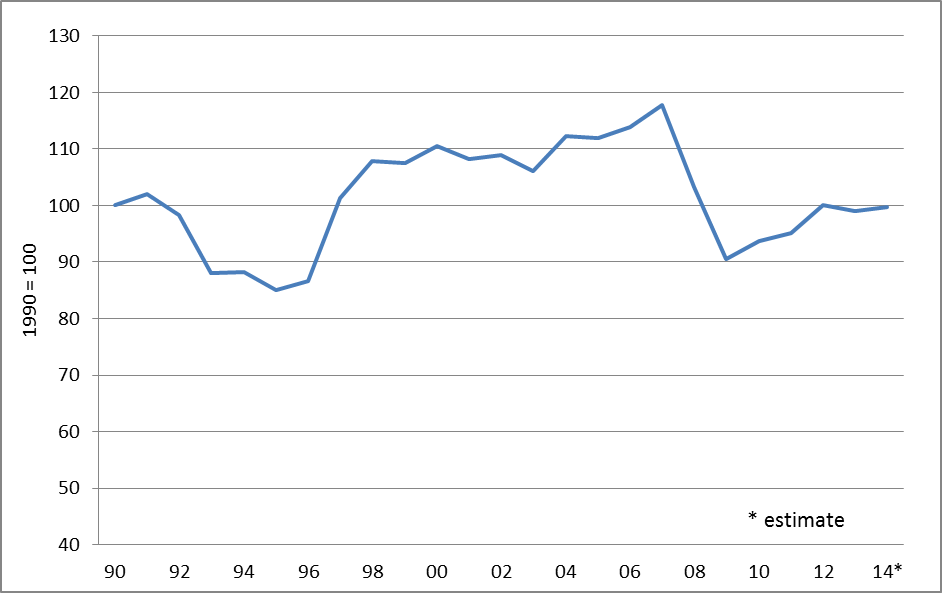 Can the UK’s outperformance be sustained?  Business investment is finally recovering, making the economy less dependent on consumption. Employment is rising quite strongly, and the number of full-time jobs is rising and the total of part-time ones shrinking. The fall in unemployment should eventually see real wage growth turn positive. Strikingly, the UK has experienced one of the largest falls in real wages of any EU state since 2008, which partly explains way immigration has become such a salient political issue.

Monetary policy will remain expansionary. The Bank of England is likely to delay raising rates until it is clear that recovery is firmly established and real wages have started to rise. That could be considerably longer than the markets currently assume. Although the UK economy is growing strongly, inflation pressures remain weak. Consumer price inflation stood at just 1.2 per cent in September (core inflation was 1.6 per cent). Given the high levels of corporate and household debt, any increases will be gradual. Once the general election to be held in May 2015 is out of the way, fiscal policy will be tightened somewhat irrespective of the outcome, holding back economic growth a bit.

The biggest cloud on the horizon is foreign trade. Exports to non-EU markets are up by around a third since 2008, whereas those to the eurozone are yet to return to 2008 levels. The UK’s sizeable current account deficit (of around 4 per cent of GDP) is entirely accounted for by trade with the eurozone. If, as appears all but certain, eurozone growth remains depressed for years, the UK’s deficit with it will continue to rise. And when the ECB finally launches QE, the euro is likely to weaken against sterling, exacerbating the trade imbalance. Despite the size of the UK’s external deficit, there is a risk of sterling strengthening too much, undermining the gradual recovery in investment in the tradable sector. 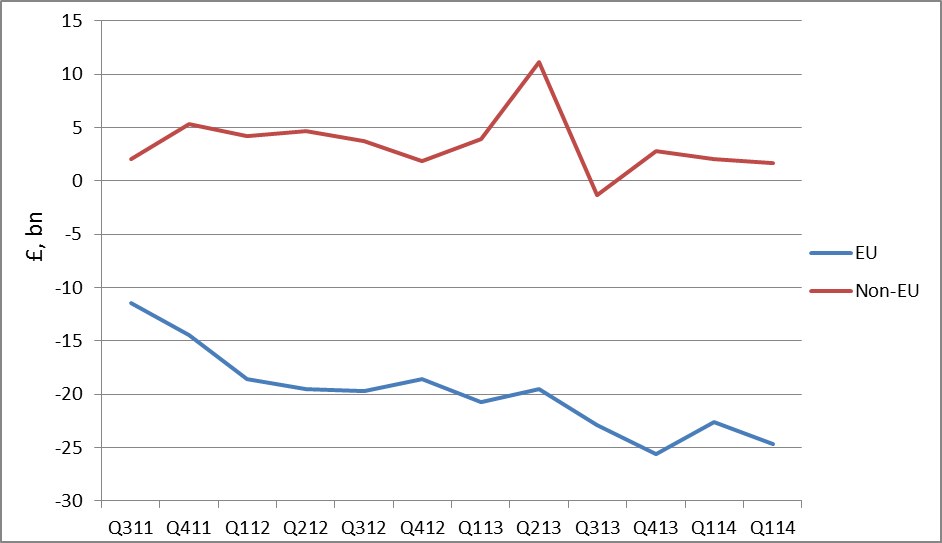 The UK’s economic prospects look reasonably good, but are flattered by the dire outlook for the eurozone. After expansion of a little over 3 per cent in 2014, most forecasters expect the British economy to grow by 2.5-3 per cent in 2015 and around 2.5 per cent the year after. Even the European Commission, which is notoriously bullish on the eurozone (resulting in it having to repeatedly revise down its numbers), expects the difference between eurozone and UK growth rates to be around 1 per cent in both 2015 and 2016. Most other forecasters expect a bigger gap.

What does this mean for relations between the UK and the eurozone? On the face of it, there is no reason why much stronger growth in the UK than in the currency union should harm relations. After all, Britain grew more rapidly than the eurozone in the decade running up to the crisis, and this coincided with a period of almost unprecedentedly good EU-UK relations. A Britain whose economy is expanding reasonably quickly could be more at ease with itself and with the rest of Europe. Concerns over immigration could dissipate, with attitudes returning to the grudging acceptance seen prior to the crisis. It could also become harder for the rest of the EU to ignore UK concerns about particular issues, helping to address the widely held perception in Britain that the country is unable to defend its interests.

However, there is a less optimistic scenario. Although real wages should start to edge up with the tightening of the labour market, it will take many years before they return to pre-crisis levels. As a result, popular resentment over immigration will remain a problem, especially as immigration from struggling eurozone countries set to remain high. At the same time, the UK’s net contribution to the EU budget will rise, reflecting its increased wealth relative to the EU average. This is likely to be happening at a time when Britain is becoming increasingly marginalised within the EU, partly because of its own lack of engagement but partly because it is not a member of the eurozone. Finally, the proportion of the UK’s trade conducted with the EU will fall steadily from the current 45 per cent. Although EU membership makes it much easier for UK exporters to access fast-growing emerging markets, eurosceptics will still cite the declining relative importance of EU trade as evidence of the diminishing benefits of being in the single market.

May’s general election will have a large bearing on which of these two scenarios is closest to reality. If the Labour Party wins or is able to form a coalition with the Liberal Democrats, there is a good chance it could be closer to the first. Relations with the EU would certainly be better than under the current government, although tensions over the EU budget, immigration and management of the eurozone would still be considerable. However, such a government will need a healthy majority if it is to resist pressure from eurosceptics within its own ranks to adopt a tougher line with the EU.

A Conservative administration, especially one with a small majority or even governing as a minority, will struggle to avoid the latter scenario. Much of the party is now eurosceptic and is bound to be even more so after the election. Egged on by the media, much of the party could agitate to leave the EU in 2017’s membership referendum. Antagonistic relations with the EU would isolate Britain, allowing eurosceptics to argue that it cannot defend its interests. With some justification, they would use rising budgetary contributions to argue that Britain is paying for the eurozone’s failure to get on top of its problems. And the fall in the proportion of UK trade done with the EU will be grist to the mill of those Conservatives who argue that the benefits of single market membership are exaggerated. In this case, economic outperformance could hasten Britain’s exit.

Simon Tilford is deputy director of the Centre for European Reform.

Posted by Centre for European Reform at 3:38 pm