No, we can’t: Why Podemos is not Syriza

2015 will be a hectic year for the Spanish electorate. Over the next few months, Spain, a decentralised state with 17 different regional parliaments, will hold four different elections: to the Andalusian Parliament in March; regional and local elections in the rest of Spain in May; to the Catalonian Parliament in September; and a general election no later than December. All eyes are set on one party: Podemos (‘We can’), the rising star of the Spanish political landscape. Does Podemos stand a real chance of taking power? And what does Podemos really want?

Podemos’ origins are rooted in the 2011 indignado (indignant ones) movement which conveyed some citizens’ weariness with the Spanish political and economic situation and prompted many to vent their outrage on the streets. These protestors did not represent any particular political force. Critics accused them of not having a clear message, of lacking leadership and of staying out of formal politics. It gradually became clear that, without an organised structure and leadership, the movement would not succeed in addressing Spain’s most urgent problems. In January 2014, some of the most active people behind the movement (including university professors, economists and trade unionists) founded a new party to try to use indignation to achieve political change.

Podemos channels the anger of the many Spaniards who have been hit hard by the crisis and feel that the two main parties – the conservative Popular Party (PP) and the Socialist Party (PSOE) – no longer represent their interests. Its leadership comes mainly from the faculty of political sciences of the Complutense University in Madrid, an institution known for its long-standing commitment to far-left ideology. Media and social networks have been crucial for the rise of the party: its leader, Pablo Iglesias (who, ironically, was named after the founder of the social-democratic PSOE), is a regular participant in political talk-shows and very active on social media.

In the last six months, Podemos has risen in the opinion polls so that it is now at the very least the second most popular party. The Spanish National Centre for Social Research (CIS), a publicly funded research institute, has Podemos on 23 per cent (see Chart 1). But another survey, the latest barometer published by Metroscopia, a leading private polling company, estimates that, if elections were held now, Podemos would receive 28 per cent, beating both PP and PSOE. 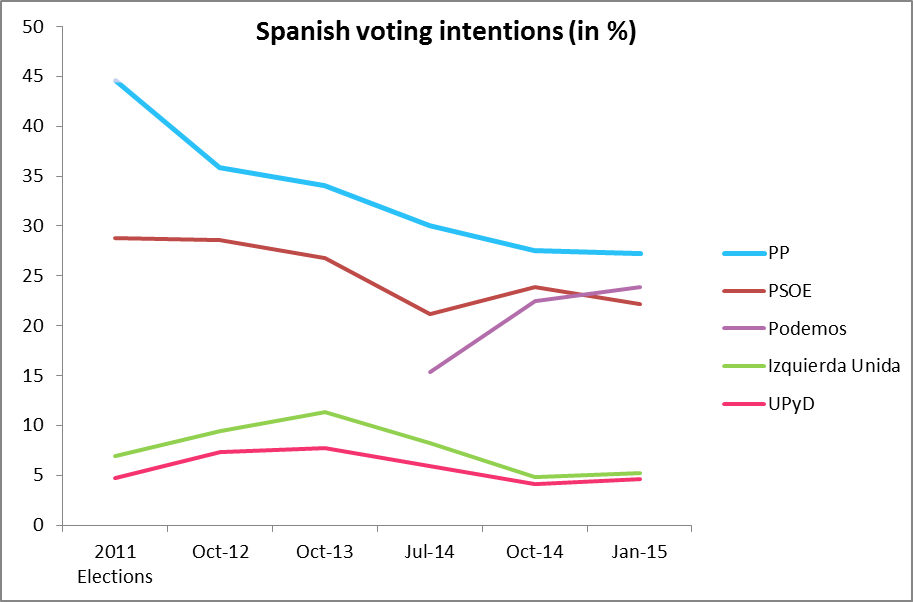 Will Podemos reallly finish second – or even first – in the general election? There are three reasons why one should be sceptical. First, the fact that Podemos was founded one year ago and its future development is unpredictable. Second, the evidence that citizens are mainly drawn to Podemos by disenchantment with the two major parties, rather than affinity with the party’s ideas. Third, the peculiarities of the Spanish electoral system, which rewards or punishes parties according to the regional concentration of their votes.

Podemos is a new party with no government experience, even at the local level. So far, it has received little negative exposure. It capitalises on discontent with the Spanish political system, so its popular support is dependent on current issues and events. Podemos’ recent jump in the polls coincided with police action against major corruption networks, resulting in the prosecution and incarceration of several public figures from both PP and PSOE. Podemos received extensive and positive media coverage of its first general assembly, in October, which confirmed the media-savvy Iglesias as the party leader. But it is difficult to predict the behaviour of Spanish voters if corruption scandals fade away and when the time comes to elect a government. A stable two-party system has been in place since the first post-Franco democratic elections in 1982. Although Spaniards are worn out by the long-lasting economic crisis, fear of the unknown still plays a major role in the collective conscience of a society strongly attached to its institutions. Many voters will shy away from major shifts of power, anxious that a change might bring about political instability and a re-opening of old wounds from pre-democratic times.

The rules of the electoral system in Spain are often ignored when analysing opinion polls, but they are vital for an accurate prediction of the election results. Spain is a quasi-federal state with strong regional identities. The electoral system is designed to avoid the fragmentation of power and to ensure political stability and governability. A complex formula ensures that any party that does not reach 25 per cent of the votes will be under-represented in parliament. Meanwhile, the rules ensure that regionalist parties are well represented at the national level. The votes won in smaller, rural electoral districts are more valuable to parties than those won over in bigger, more urban hubs. Both features derive from Spain’s political history, when the Parliament collapsed on several occasions due to the combination of both the proliferation of many smaller parties and rising regional tensions. These traits help to explain why Spain’s two-party system has endured (both PP and PSOE have traditionally obtained more than 25 per cent of the votes each) and why smaller, nationwide parties, generally from the left, have been under-represented vis-à-vis their regional counterparts (such as nationalist parties in Catalonia, Galicia or the Canary Islands).

Both factors may constrain Podemos’ electoral performance. If Podemos stays at around the 23 per cent mark, as consistently shown by official polls, it will receive fewer than 23 per cent of the seats in parliament. Podemos’ supporters mostly live in big cities, and the party’s poll ratings in smaller, more rural areas are modest. If Podemos cannot boost its rural vote, and that does not seem likely, it will do much worse at the general election than current polls suggest.

Over the past year, analysts have been struggling to understand what Podemos’ main objectives really are. The party itself is being deliberately vague. This has lead many commentators (and a large part of the public) to wonder whether Podemos has any political programme at all. The party’s rethoric on the need for transparency, honesty and political integrity is attractive to many Spaniards after the corruption scandals and the long-running slump. Podemos seems to believe that a renewal of Spain’s political class will, by itself, help the country to navigate its way out of the crisis. Unlike Syriza, which blames Greece’s problems on external decisions taken by the ‘troika’, Iglesias’ party denounces Spain’s internal enemies: the corrupt ‘caste’ – the governing elites. Mirroring Spanish society, Podemos is fairly pro-European. The party supports EU membership and advocates a reformed eurozone. Its leaders, from a generation which greatly enjoyed the benefits of Spain’s accession to the Union, fear the impact of a hostile relationship with Brussels. In their call for reform, Podemos’ leaders are unlikely to follow Syriza’s confrontational strategy with the European institutions.

Over time, the party’s economic programme has become more mainstream, very much in line with traditional social democracy. Podemos advocates reforming the mandate of the European Central Bank to introduce growth and employment objectives, reforming the institutions and the structure of the currency union and reconsidering austerity policies. The Spanish socialist party included very similar ideas in their programme for the 2014 European Parliament elections. However, Podemos has been more vocal about the need for reform.

Although some of Podemos’ proposals fall under the classic definition of populism, its dissonant voice could help to generate a more serious debate on the need for reform of the EU’s economic and fiscal policies. Podemos’ growing influence may help to push PSOE to take a tougher line on reforming eurozone governance. Pedro Sanchez, the socialists’ newly elected leader, has already started (albeit timidly) to advocate changing Europe’s economic policies. He has recently began publicly to criticise the austerity measures that his party helped to implement, calling for the EU institutions to introduce growth and employment objectives.

Podemos will almost certainly not win the 2015 Spanish general election. Its irruption onto the Spanish political scene will push PSOE to the left, and could change the socialists’ euro policy. But PSOE is also unlikely to win the elections. Podemos’ approach to Europe is more moderate than that of Syriza, since it focuses primarily on internal issues. Whether Podemos comes second or third, it is unlikely to put Spain on collision course with the EU institutions.