Why devaluing the euro is not mercantilism

The value of the euro is a topic of constant debate in European policy circles. The debate follows a regular pattern: French or Italian policy-makers bemoan the strength of the euro because it hurts their exports; German policy-makers rebuff such claims; the European Central Bank (ECB) claims it is not aiming for a particular value of the euro as its mandate is focused on price stability only; and international commentators point out that the eurozone is simply too large to pursue a purely export-oriented strategy anyway. All sides have a point. But more expansionary monetary policy is necessary to kick-start a broader eurozone recovery, in part via a boost to exports from a lower exchange rate. This is not a mercantilist strategy as imports are likely to grow, too, when incomes recover. The recent fall from $1.37 in early July to $1.27 at the time of writing is a good start but the ECB needs to be innovative and drastic to lower it further and start a proper recovery.

A major benefit of having a national currency is that it devalues in times of economic weakness, thereby boosting exports. Such devaluations are usually not the main aim of monetary policy-makers but a side-effect of more accommodative monetary policy (or the expectation thereof): the central bank lowers interest rates, which leads investors to search for higher yielding assets abroad, and this weakens the currency. Besides its effect on exports, a weaker currency usually leads to higher inflation too, as imports – such as energy – become more expensive. The combination of stronger economic growth via exports and higher inflation via imports is what the central bank was after. The currency is thus one of many ways in which monetary policy actions affect the economy.

Currently, the euro is too strong for the eurozone. While there are various ways to estimate the ‘fair value’ of a currency, the easiest way is to look at current inflation rates and growth prospects. Both are, for various reasons, at exceptionally weak levels in the eurozone. Given that weakness, monetary policy is too tight, and the euro would be weaker with a more appropriately aggressive monetary stance. If the euro is too strong for the eurozone as a whole, it is certainly too strong for its weaker economies such as Italy. When France and Italy bemoan the strength of the euro, they are in effect calling for a more expansionary monetary policy. The currency is just a catchy way of phrasing that.

For Germany, the euro could in fact be higher than it is now; most estimates consider a value of around $1.40 as appropriate – despite disappointing German growth and inflation. The reason is that the demand for German goods from outside the eurozone, for which the exchange rate matters, is hardly to blame for low growth and inflation. The causes are rather the weakness of demand from within the eurozone, one of Germany’s main export markets, and of domestic German demand, which is growing on the back of moderate wage growth and record employment but not fast enough. A higher euro by itself would do little to weaken the German economy.

A stronger euro would give consumers a boost in real income, though. After all, a stronger euro buys more iPads and holiday trips than a weaker one. This is the first reason why Germany rebuffs demands to devalue. The second is that it involves further easing of monetary policy, which at this point, after interest rates are already at zero, means buying risky private assets and, more importantly, sovereign bonds – which Germany strongly resists. However, given that Germany would clearly benefit from a stronger eurozone economy, more monetary easing and a weaker euro is ultimately in Germany’s self-interest.

The ECB claims that it is not aiming for a particular value of the euro, and that its sole objective is to deliver an inflation rate of “below, but close to, two per cent”. While this is true, the euro’s value has an impact on the inflation rate and growth: if the currency’s value falls, it lowers the prices of export and raises those of imports. A rule of thumb is that a 10 per cent fall in the trade-weighted exchange rate of the euro leads to higher inflation of 1 percentage point. The ECB’s own estimates, for example, show that a euro value of $1.24 at the end of 2016 (down from the $1.34 at the time of this estimation, and corresponding to a 3.9 per cent decline in the trade-weighted exchange rate) increases inflation by 0.2-0.3 percentage points.

Since most other transmission channels of monetary easing do not seem to be working as expected or hoped, the currency remains an important way to stimulate the economy, and ECB president Mario Draghi has made similar points recently. But will it work to boost European exports, or even: should it? After all, the eurozone is a large part of the world economy, and an export-led growth strategy would have to be absorbed by the rest of the world via imports, which might be impossible or at least unsustainable.

It might seem counter-intuitive, but an export-led recovery, driven by a depreciation of the currency, does not necessarily lead to an increase in net exports (that is, exports minus imports). The reason is that more export revenues might be used to import goods from abroad. This is especially true in a depressed economy where imports have already massively contracted: incomes are low, and hence consumption, investment, and imports are depressed such that a gain in income boosts all three, leading to a virtuous circle of growing domestic incomes and more imports. The effect on the trade balance is ambiguous. The exchange rate depreciation can thus be a kick-starter for a broader monetary policy-led recovery, without driving the export surplus to unsustainable levels. In fact, it can reduce it.

Argentina and Japan are cases in point. In 2002, when Argentina devalued its currency, exports were a main driver of the recovery for the first six months, growing by an annualised rate of 6.7 per cent. Thereafter, however, imports grew by a whopping 50 per cent (annualised) during the two years between mid-2002 and mid-2004, making net exports a drag on growth and reducing the trade surplus considerably. Japan has recently embarked on a large devaluation experiment, as part of ‘Abenomics’. While the verdict is still out on whether it has been successful in boosting growth and inflation, it has certainly not, despite a massive devaluation of the yen, led to a surge in Japan’s trade balance (see chart one). 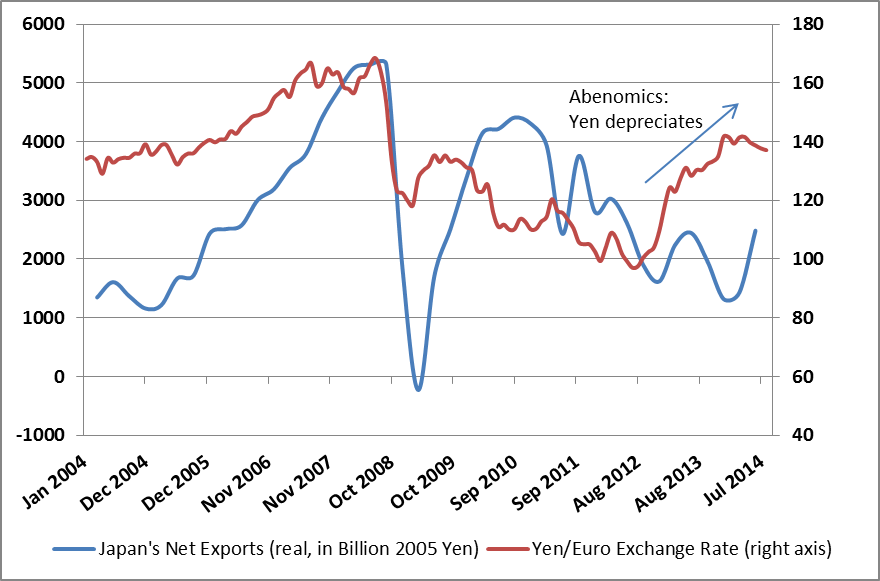 Of course, each case is special. The eurozone periphery has high levels of foreign debt and thus needs to pay down its debts (see chart two). This requires a positive trade balance for a while. Most eurozone countries are rapidly aging societies and therefore have fewer investment opportunities than the rest of the world. This means they should aim to invest abroad, again requiring a trade surplus. In addition, Germany’s current account surplus seems to be stuck at an extraordinarily high level, adding to the current account surplus of the eurozone which has now reached more than 2 per cent of GDP (up from roughly zero pre-crisis).

However, the current account surplus is unlikely to rise if and when more aggressive monetary stimulus depreciates the euro. As argued above, the depressed economies of southern Europe suggest that a boost to demand in the eurozone will reduce the trade surplus. The effect on the German current account surplus is ambiguous but a weaker euro might help to reduce it, too, if the boost to Germany’s exporters and the rest of the eurozone strengthens the German economy, leads to higher wages, and thus to higher incomes and more imports. 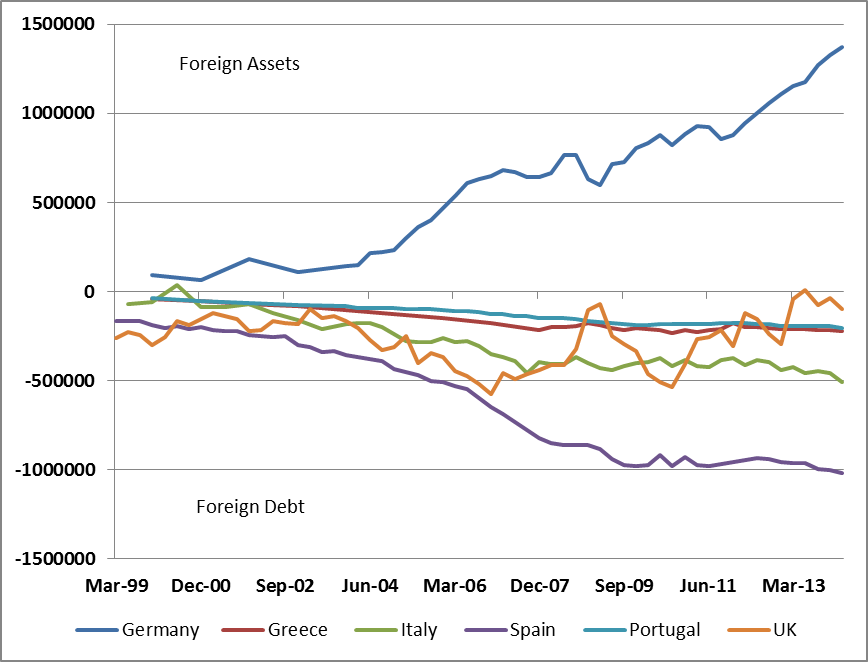 Overall, there is a strong case for more currency depreciation and hence, more aggressive monetary policy. Now that the euro has weakened, it seems that past ECB actions are finally working their magic via the currency channel. This downward trend is unlikely to continue for much longer, however. Currencies have a tendency to overshoot: investors first get out of low interest rate areas, causing the currency to fall, before it slowly appreciates. Japan has seen its currency constantly appreciate in the face of low growth, very low inflation and even lower interest rates.

The eurozone must avoid this Japanese trap. The ECB’s newest measures are unlikely to be enough to lower the euro further than the current $1.27, or to sufficiently stimulate the economy otherwise. First, its latest attempt to encourage banks to lend to firms (so-called TLTROs) has been underused by banks so far (the next round is in December), in part because demand for new lending from firms is low and the prospects of the eurozone economy do not suggest demand will increase by itself soon. Second, the ECB’s plan to buy private assets, while a good start, will not be effective if it remains a stand-alone measure, without the ECB pushing up inflation and income expectations of firms and households.

In order to provide the necessary stimulus to weaken the euro, the ECB needs to take two actions. First, it should make clear that it intends to make up for excessively low current inflation (just 0.3 per cent in September) with somewhat higher inflation in the future, such that two per cent inflation over the next five years is reached on average. This will increase future inflation, lower real interest rates and push down the euro. This approach is called price-level targeting. Second, in order to make its commitment to this price-level target credible, the ECB should announce unlimited purchases of assets of its own choosing – preferably domestic private and foreign public assets – until the target has been reached.  As the ECB has learnt when its famous OMT programme arrested panic in bond markets, threats of unlimited intervention by a central bank are much more effective than limited fiddling in financial markets. The Swiss were successful with a similar strategy of a credible promise and unlimited purchases in containing the appreciation of the franc.

With these two measures – the first innovative, the second drastic – the ECB will succeed in providing the monetary stimulus needed to put the eurozone on a path toward a proper recovery, including a weaker euro and potentially a lower trade surplus. Without more ECB action, however, the euro might well increase in value again, weakening exporters, lowering already too-low inflation and destabilising the eurozone economy further. The political backlash against the euro and the EU could become impossible to contain. It’s time for the ECB to really do whatever it takes, yet again.

Christian Odendahl is chief economist at the Centre for European Reform.


Posted by Centre for European Reform at 4:04 pm