Would Britain’s trade be freer outside the EU?

In the ‘Brexit’ debate, there are two ideas that simply will not die, however much evidence is thrown at them.

The first is that Britain could leave the EU and then opt back in to those areas of the single market that it liked. The CER’s commission on the economic consequences of leaving the EU, which reported in the summer, explained why this would not happen. The remaining EU countries would not let Britain cherry-pick: the four freedoms of goods, services, capital and labour come as a package. And, in order to maintain undiminished access to EU markets – perhaps by joining the European Economic Area – Britain would have to sign up to all the EU’s rules and standards, but would have little influence over them. For a country so unhappy with ‘rule from Brussels’, it would be an odd choice to cede more power over the regulation of its economy.

The second idea, which is usually put forward after the first has been debunked, is that Britain outside the EU could compensate for any higher trade costs with Europe by signing free trade agreements (FTAs) with other countries. What follows is an attempt to test this proposition empirically.

Economists at the World Bank have put together a database that measures how costly trade in goods is between all the countries in the world. Trade costs can come in various forms. One cost is taxes on imports: tariffs. Another arises from non-tariff barriers, like quotas restricting imports, or national regulations that prevent imported goods, made to different standards, from being sold. Still another is distance. It costs money to transport goods from one country to another, so distant countries will tend to trade less than neighbouring ones. The World Bank’s researchers have quantified these costs. With their data, it is possible to compare the EU’s performance at cutting these costs for Britain – this, after all, is the point of the single market – compared to other countries.

Chart 1 shows the World Bank’s estimates of trade costs between Britain, the EU, the rest of the OECD and the eight emerging economies with which Britain conducts most trade: China, India, South Africa, Russia, Nigeria, Brazil, Malaysia and Indonesia (listed in order of how much they trade with Britain). Britain’s trade with non-European members of the OECD is more costly than it is with the EU: barriers to trade with these countries are equivalent to 98 per cent of the value of the goods traded, compared to the EU’s 85 per cent. In other words, these trade costs would add 98 pence to the price of a good produced in Britain for £1. The cost of trade with emerging economies is higher still. And costs have fallen less with Britain’s most important trade partners outside Europe – both developed and emerging – than with the EU since 1995, the first year for which there is data.

Chart 1. Trade costs between Britain and the EU, the rest of the OECD, and emerging economies. 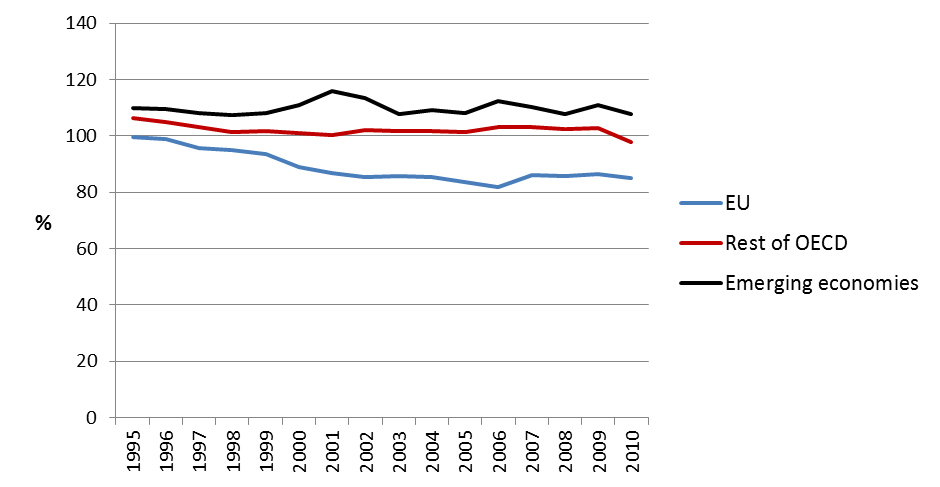 The cost of Britain’s trade with the EU, on the other hand, dropped by 15 percentage points between 1995 and 2010 – although the decline stopped after 2007. And since the EU is Britain’s largest trading partner, this fall is all the more valuable. Chart 2 shows by exactly how much. It weights trade costs between Britain and other countries by the amount of trade conducted with them. Since around a half of all Britain’s trade is with the EU, that fall has cut the total cost of Britain’s trade by 0.4 percentage points a year. The small declines in the cost of trade with the rest of the OECD, emerging economies and the rest of the world are less valuable, not only because they have been smaller, but also because Britain conducts less trade with those economies. 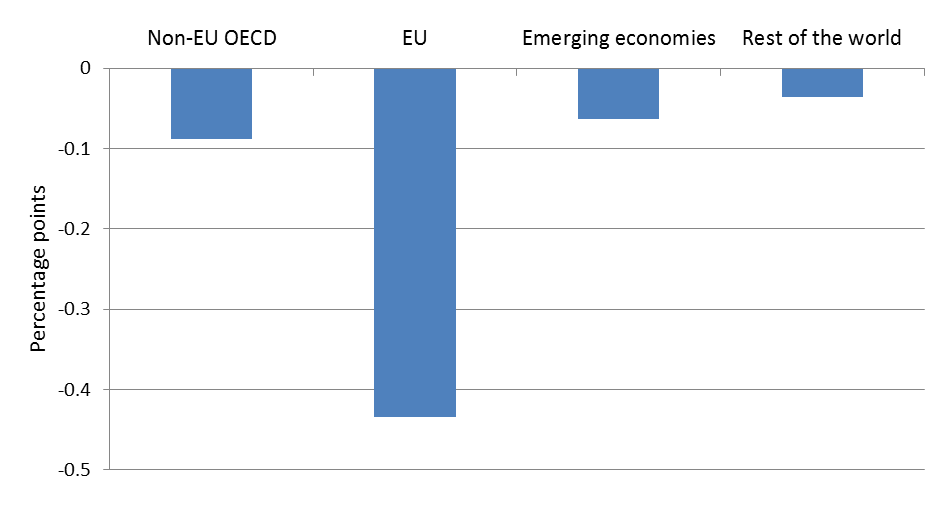 However, this is all about the past: one might argue that, after it left the EU, the UK could simply sign an FTA with the Union to secure the existing economic benefits of European integration. Although a Britain outside the EU might be able to negotiate such an agreement, British goods and services could only be sold in EU markets if they met European rules. If Britain’s antipathy to EU rules led over time to its adopting different rules for products sold on the domestic market, trade costs with the EU would increase.

Consider an optimistic scenario after a British exit. The EU does not impose the common external tariff on Britain’s goods, but trade costs do not fall as quickly with the EU as they had before, because Britain refuses to sign up to all future rules of the single market in order to secure access. And let us assume that the fall in trade costs forgone would only be worth 0.2 percentage points a year, since initiatives to deepen the single market have stalled since 2007. In ten years, this would amount to a missed opportunity in the form of a 2 percentage point reduction in the total cost of Britain’s trade.

Could Britain not easily sign FTAs elsewhere in the world to make up for these forgone gains? The answer has to be no.

While Britain’s trade with the rest of the world is growing faster than with the EU, Europe will continue to be its largest trade partner for decades to come. The rest of the world’s contribution to the total reduction of Britain’s trade costs was less than one-third that of the EU, between 1996 and 2010 (Chart 3). This means that any attempts to reduce the cost of trade through FTAs with non-EU countries would have to be very effective to make up for forgone trade with Europe. 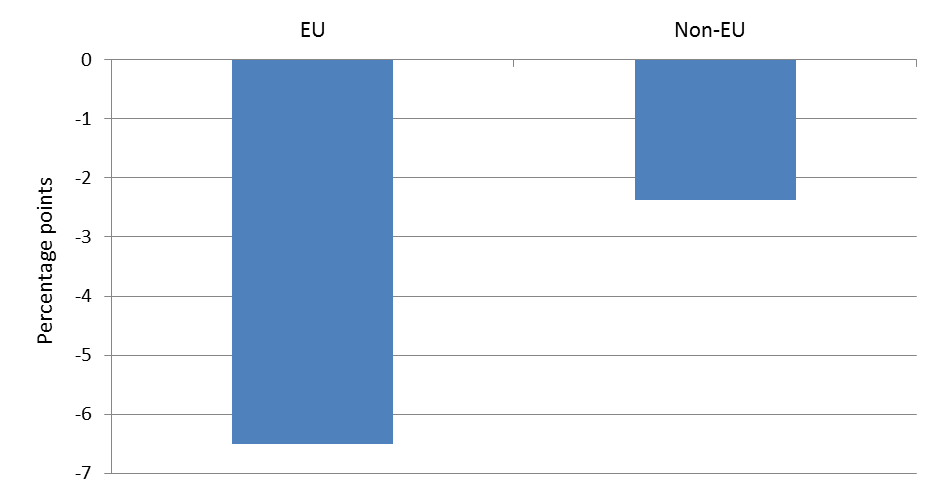 This would not be easy. Australia and Canada’s free trade agreements with the United States offer a rough guide to the size of the gains that the UK might make by signing a similar agreement with its second largest trade partner. Canada signed the North America Free Trade Agreement (NAFTA) with the US and Mexico in 1994. Australia’s FTA with the US came into force in 2005. Chart 4 shows the changes in Canada and Australia’s total costs of trade that can be accounted for by the US in the years after their agreements. The US accounts for 55 per cent of Canada’s trade, but the cost of trading with the US went up slightly between 1995 and 2008 – albeit from a very low base. Most of Canada’s trade gains from NAFTA arose from falling costs with Mexico. Australia’s trade costs with the US fell after its FTA came into force. But because Australia’s trade with the US only accounted for between 7 and 10 per cent of its total trade over the period, the US FTA did not bring down its total cost of trade very much – around 0.06 percentage points a year. The UK conducts a similar proportion of its trade with the US as does Australia – 8.5 per cent – so one could expect similar, small gains from any FTA signed with the US after Britain had left the EU.

At best, these gains would be far smaller than the opportunities forgone with the EU. At worst, they would make little difference, since tariffs between non-European OECD members are low, and it is very difficult to persuade countries as unwilling to share sovereignty as the US and China to agree to common standards and rules.

Chart 4. The US contribution to Australia and Canada’s total trade costs after FTAs were signed, annual average. 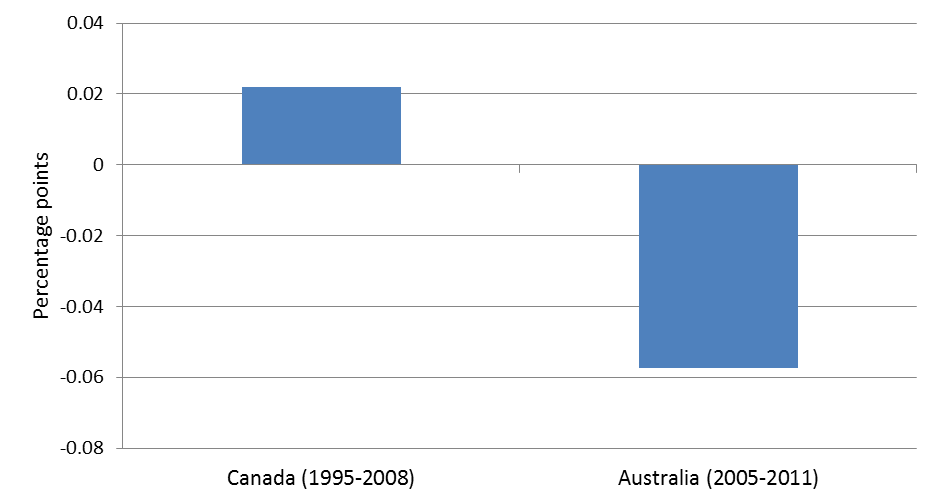 Britain’s choice is this: it can choose to stay in the single market – a very deep FTA, agreed with its largest trade partners, and one with a proven track record in reducing the cost of trade. Or it can leave it, and try to sign dozens of free trade agreements with less certain benefits to make up for the opportunities forgone in Europe. The conclusion should be obvious: free traders should support Britain’s continued membership of the EU.