Between 2005 and 2014 there was an extended period of high oil prices. From 2011 to 2014, Brent oil averaged $107 per barrel. But in mid-2014 prices plummeted. Oversupply – booming US shale oil production in combination with unchanged levels of production in OPEC countries – met falling demand, particularly from a slowing Chinese economy. Supply disruptions, sanctions and conflicts – which removed more than 3 million barrels per day from the market in 2015 – had little effect on the downward trend in oil prices. On October 6, Brent oil was trading at around $52 per barrel. 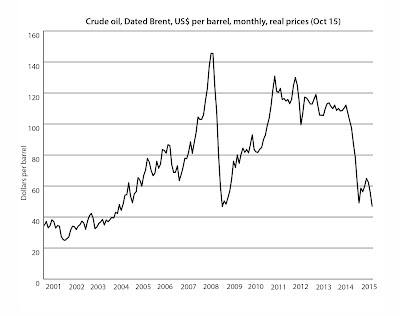 The period of high oil prices had negative consequences. It led to a massive transfer of wealth from Western economies to oil producing ones, which weighed on European recoveries and filled the state coffers of (mostly) less democratic states. Defence spending, repression and corruption increased in the Middle East and Russia. Since oil products are a key ingredient in fertilisers, high oil prices contributed to soaring food prices, putting extra strain on import-dependent emerging economies, like Egypt. This was one of the factors that led to the 2011 Arab Spring uprisings. Pirates and militant groups in the Gulf of Guinea specialised in stealing crude oil from pipelines and tankers.

Now, developments in both supply and demand are likely to depress prices for some time, perhaps until the end of the decade. The markets are bearish about prospects in the years ahead: oil futures contracts for early 2020 currently trade at less than 60 US dollars ($). On the supply side, American shale or ‘tight’ oil production can respond to price changes more quickly than conventional production can. Rystad Energy, a Norwegian energy consultancy, estimates that on average US shale oil becomes economic to produce at $58 per barrel; so increased US supply could slow global price rises above that level. In addition, in mid-2016 sanctions on Iran’s oil sector will end; as it attempts to win back market share it could soon add one million barrels per day to global output, increasing the world’s excess capacity.

On the demand side, China is slowly moving away from energy-intensive heavy manufacturing towards domestic and urban services, and its growth rates will inevitably fall from stellar to merely robust. The recovery in the eurozone is shaky, the IMF has corrected its global growth forecast downwards and overall energy efficiency gains mean the world confronts a depressed demand for oil, for now.

So, is the current price decline a good thing? Unfortunately a sustained period of low oil prices will create its own foreign and security policy problems. Low oil prices hurt the bottom line of oil-exporting countries. The IMF expects the export earnings of the Gulf states this year to decline by $287 billion due to the price collapse. Since 2011 governments across the Middle East have increased social spending to keep their populations happy in the wake of the Arab Spring uprisings. They may now struggle to maintain that spending.

In many oil-exporting states, those who control the oil wealth control most of the economy. If expected oil proceeds decrease in countries where ethnic, tribal or religious communities compete for political influence – as in many countries in the Middle East – this could become a cocktail for instability and conflict.  Jihadist groups in the region may find it easier to recruit disgruntled youth when economic problems rise. The risk of social unrest may lead governments to increase repression, resulting in human rights violations, terrorism and migratory pressures.

The chart below shows the depth of a country’s state coffers and the oil price at which oil-exporters can balance their books (called the ‘fiscal breakeven price’). The size of the bubble reflects the population that needs to be kept happy. An oil-exporter would prefer to be in the lower right-hand corner: able to balance the books with a low oil price, and with substantial government reserves to withstand years of low oil prices. Countries in the upper left-hand corner have breakeven prices in excess of the current oil price, and small financial buffers. 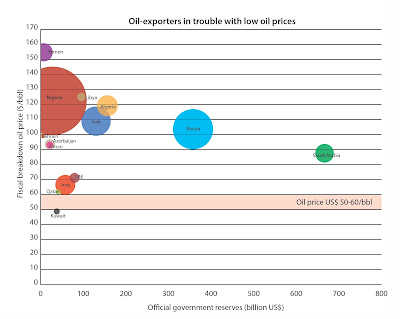 Only Kuwait still earns money at current prices. Saudi Arabia can weather low oil prices for a long time due to its massive reserves, but others are not so fortunate. Bahrain has a high breakeven price, limited government reserves, large debts and a high rate of oil and natural gas extraction; only about ten years’ worth, at current rates. Under these difficult economic conditions, tensions between the ruling Sunni minority and the Shi’a majority could boil over, as they did during the Arab Spring. Despite its small financial buffer, Iraq sits on massive oil wealth and has a relatively low fiscal breakeven price. This suggests that if it is able to attract investment into its oil sector, it could prosper despite low oil prices. But the fight against the Islamic State terror group and Baghdad’s inability to reach a revenue-sharing agreement with the Kurds mean this may be difficult.

Outside the Middle East, crude oil, natural gas and oil products make up 90 per cent of Nigeria’s exports. It has limited reserves, a high breakeven price and a large and growing population that demands improved social services and economic opportunity. Groups like Boko Haram could exploit such grievances.

The Russian economy is heavily dependent on oil as Andrey Movchan from Carnegie’s Moscow centre explains. The chart above suggests that it has substantial reserves to deal with low oil prices, but Ian Bond and Christian Odendahl have argued that Russia’s state coffers may not be as full as the official statistics suggest. Russia has responded to low oil prices by pumping record quantities of crude, but Western sanctions against its financial and oil sectors as a result of its intervention in Ukraine are making it hard for Russia to replace depleted oil fields. If low oil prices persist, President Vladimir Putin will have to choose between maintaining social spending and pushing on with his expensive programme of defence modernisation. Although Russia’s vulnerability to oil price fluctuations should convince him to diversify the Russian economy, Putin may prefer to distract public opinion with military adventures abroad. It is worth remembering that Iraq’s president Saddam Hussein invaded neighbouring Kuwait in 1990 during a period of low oil prices.

Metal prices have fallen along with the oil price, and so developing countries that are dependent on mineral extraction face similar difficulties: copper accounts for 73 per cent of Zambia’s exports; 60 per cent of Mauritania’s exports comprise iron ore and copper; 90 per cent of the Democratic Republic of Congo’s exports consist of copper, cobalt and oil. The longer the price slump lasts, the more weak governments in these countries – many of which have a history of civil strife – will struggle.

The role of the US in both global oil markets and (potentially) Middle Eastern politics will change. American shale oil will continue to put downward pressure on prices. It makes the United States, not Saudi Arabia, the global swing-producer; and it challenges the cohesion of the OPEC oil cartel, as maintaining market share rather than high prices becomes the overriding concern for OPEC’s members.

In Europe, the impact of low oil price is mixed. The economic effects are clearly positive: low oil prices boost household incomes and reduce production costs. The impact of the Chinese slowdown, a negative for the European economy, is partially off-set by the subsequent fall in the oil price. But persistently low prices may complicate the EU’s efforts to reduce its dependence on Russian gas by delaying investment and production in some of Europe’s most important gas and oil suppliers, including Algeria and Azerbaijan. The Shah Deniz-2 gas project in the Caspian, bringing gas from Azerbaijan to Europe and a critical element in the EU’s efforts to increase its supply of non-Russian gas, loses money at current prices.

From a climate perspective, there is both good and bad news. The exploitation of high-cost energy sources will be delayed, including off-shore Arctic resources, complex ultra-deepwater fields and Canadian tar sands. Perhaps $200 billion in capital expenditures, mostly involving deepwater and oil sands projects, has been deferred due to the oil price bust, say energy consultants at WoodMackenzie. (Some Arctic projects and oil sands production could become economic again at $70 per barrel.) The controversial development of European shale resources might be unnecessary (and uneconomic) with the current oil and gas glut.

In the longer term, low oil prices should create an incentive for oil producers to modernise their economies to reduce their dependence on hydrocarbon exports – if they can afford the necessary investment and show the political will. If so, Europe should be prepared to assist them with the transition.

But low oil prices also challenge European climate policy, which rested on the assumption that oil prices would continue to rise, gradually making renewables and other low-carbon technologies more attractive. Low oil prices are linked to a drop in the carbon price. Meanwhile, coal has also become cheaper. Robust regulation rather than market forces will thus be needed to achieve Europe’s climate objectives. This also has consequences for the international climate conference in Paris in December. In a low oil-price environment, reaching binding decisions on climate targets becomes much harder. Though the US and China may push for an agreement in Paris, emerging economies like India and Turkey – which experience soaring energy demand  –  may be more reluctant to commit to costly emissions-reductions strategies.

Finally, and most urgently for European policy-makers, the arc of instability around Europe’s southern and eastern periphery, full of oil-exporting countries, will get more unstable if the oil slump lasts. This could lead to more regional conflict, an increased risk of terrorism, new refugee flows to Europe and more stress on EU countries struggling to cope with mass migration. European governments should consider this when debating spending priorities: a world of low oil prices will demand investment in development and humanitarian aid, security and in capable military forces.

Oil prices that are neither too high nor too low are good from a foreign policy perspective. But because the oil market tends to overshoot and undershoot, a ‘goldilocks’ oil price will remain elusive. For now, Europe should be ready for its neighbourhood to stay turbulent as long as cheap oil reigns.