Power to the parliaments! But will Cameron’s EU partners join his crusade?

David Cameron wants national parliaments to have more say in the EU, but other European capitals have little appetite for radical change. He should instead focus on improving existing mechanisms for parliaments to influence draft EU legislation.

The British Prime Minister, David Cameron, has been touring European capitals to present his package for reforming the EU. Among other things, he wants a stronger role for national parliaments in the EU, but he has yet to make detailed proposals. Philip Hammond, the foreign secretary, calls this the “scoping stage” during which Cameron is testing Europe’s appetite for reforms.

National parliaments can already club together to tell the Commission that a draft EU law is unnecessary if it covers an issue better left to individual member-states to regulate (the ‘subsidiarity principle’). Each national parliament has two votes (one vote per chamber in bicameral parliaments) which it can cast against a Commission proposal. One third of all the votes (or a quarter in relation to justice and home affairs proposals) constitutes a so-called ‘yellow card’; more than half of the votes constitutes an ‘orange card’. The problem is that the Commission can in both cases press on with its proposals. The orange card is only stronger because, when parliaments show one to the Commission, a vote by 55 per cent of the member-states in the Council of Ministers or a simple majority of the European Parliament can block the proposal at the beginning of the legislative process.

Eurosceptics in the Conservative Party have long argued that national parliamentarians rather than unelected technocrats in Brussels should judge whether EU legislation will benefit citizens and enterprises. They want to give parliaments a ‘red card’, so that national legislatures can join together to force the Commission to withdraw draft laws. In their 2015 election manifesto the Tories promised to give parliaments powers to block EU legislation, and eurosceptics want Cameron to deliver on this pledge.

In July 2015 the House of Lords EU Select Committee advised David Cameron to look at more constructive ways for MPs to get involved in the EU. The peers favour a ‘green card’, whereby parliaments could suggest that the Commission propose laws, or amend or repeal existing EU legislation. A green card procedure might tackle the misconception in Brussels that national parliamentarians are more interested in blocking EU decision-making than in making the Union more effective. The Lords think that EU leaders would give a warmer welcome to ideas which promoted a positive role for parliaments. The UK’s Europe minister, David Lidington, has acknowledged the idea but refused to say whether the green card would be part of the renegotiation package.

David Cameron stands little chance, however, of getting support for green and red cards from all 27 member-states. Probably only The Netherlands, Hungary and Denmark would back him. Since the Dutch voted down the EU’s constitutional treaty in 2005, their government hopes that national MPs, who are often more attuned to voters’ concerns than MEPs, can help to narrow the gap between the EU and its citizens. Cameron can also count on Hungary’s prime minister. Viktor Orbán’s firm opposition to the Commission’s push for mandatory refugee quotas has been popular with Hungarians. If a red card procedure could block similar Commission proposals in future, then Orbán could further boost his ratings at home by endorsing Cameron’s idea. Denmark would probably back green cards, if not red ones. The chair of the Danish European affairs committee in the last parliament, Eva Kjer Hansen, championed green cards, arguing that MPs are “in politics to seek solutions, not just block things”. Now that she is in the liberal government of Lars Løkke Rasmussen, she should not find it too difficult to convince the Danish prime minister to support it.

There are also several other EU countries which are unlikely to stand in Cameron’s way. Ireland may not be convinced about the added value of Cameron’s proposals: between 2010 and 2013 Ireland opposed only five Commission proposals on the grounds of subsidiarity: Irish parliamentarians are not desperate to participate in EU decision-making. But Ireland will probably not put its long-standing political, cultural and economic ties with Britain at risk over the issue of national parliaments.

None of these countries, however, want treaty change, so Cameron will have to come up with creative ideas for introducing red or green cards without reopening the EU treaties. According to the treaties it is the European Commission that proposes new legal acts and decides whether to withdraw or persist with a proposal in the face of a yellow card. But there is nothing to stop Cameron from proposing a gentleman’s agreement to the Commission, whereby it would undertake to respect green or yellow cards. If Cameron fails to get such an agreement, he could try urging the Council of Ministers or the European Parliament to make a political commitment to drop a Commission proposal after national parliaments show an orange card.

But the European Parliament and the Commission, both of which are sceptical about any radical changes to the involvement of national parliaments, will resist such ideas. They think that parliaments’ main role is to hold their governments to account for their European policy, not to police the EU’s decision-making process. These institutions think that, were parliaments exerting greater pressure on their governments to raise their concerns and suggestions in Brussels, they would not need cards to make their voice heard.

The European Commission opposes red and green cards, too, because it fears losing its monopoly on legislative proposals. But if the success or failure of negotiations with the UK were at stake and Cameron managed to convince more member-states to back his ideas, the Commission might be ready to compromise – though it would probably attach conditions. Some EU officials have suggested that if a member-state has opted out of a policy area (such as justice and home affairs or the euro), then its parliament should not count towards the number of parliamentary chambers needed to show a card. If that rule were applied, it would make it more difficult for Westminster to build a coalition of parliaments to oppose deeper co-operation in these areas. British eurosceptics would find such a compromise difficult to swallow.

But most member-states, including Germany and France, will not be prepared to make far-reaching concessions on national parliaments. They complain that MPs show little interest in European affairs, fail to use the full potential of the existing yellow card procedure and should not take on new European responsibilities. Spain may prove to be most opposed: it frets that if parliaments had the right to veto Commission proposals they could create chaos and paralyse the decision-making process. Some member-states, like Belgium, Latvia and Slovenia, also fear that giving national parliaments red or green cards would weaken the supranational institutions: smaller and newer member-states have traditionally relied on the Commission and on the European Parliament to help them defend their interests. They worry that larger states have greater policy-making capability and more human resources. 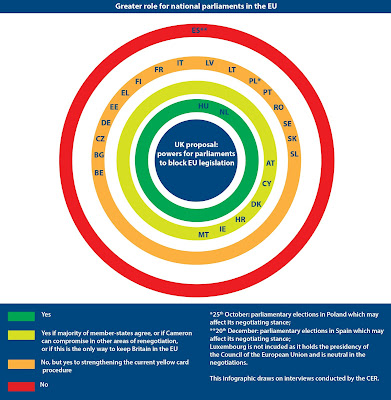 But there is some good news for David Cameron: member-states do not want the British prime minister to leave the negotiating table empty-handed. They are keen to improve the existing yellow card procedure, which is not working properly. One problem is the current eight week deadline for showing a yellow card: some parliamentary chambers, including the House of Lords, have struggled to submit their objections to Commission proposals in time because of their parliamentary timetables. Another problem is that parliaments can only show the Commission a yellow card when they think that the subsidiarity principle has been breached. They cannot challenge the Commission’s draft laws if they fear that the proposals exceed what is necessary to achieve the objectives set out in EU treaties (the ‘proportionality principle’).

Cameron should therefore focus on suggesting improvements to the current yellow card procedure rather than demanding the impossible.

The British government's own review of the balance of competences between the EU and the UK makes some useful recommendations in the report on the subsidiarity and proportionality principles. Cameron and his renegotiation team should also monitor an initiative by Luxembourg’s parliament. Marc Angel, the chair of Luxembourg's parliamentary committee on foreign and European affairs, defence, cooperation and immigration has established a working group composed of representatives of all national parliaments and the European Parliament, to look at the potential of the green card system and explore the scope to improve the current yellow card procedure. Its first meeting will take place on October 30th.

Finally, the British prime minister should be prepared to go to the European Parliament and argue for his ideas on making the EU more democratic. He has criticised the Parliament in the past, but he needs to accept that it is not going away, and MEPs need to be involved in any discussion of the EU’s democratic deficit. In September Martin Schulz, the Parliament’s president, invited David Cameron to address the plenary and elaborate on his reform package, eurosceptics will try to dissuade him from addressing MEPs. They will argue that the British prime minister is accountable only to the British parliament and should not waste his time in Strasbourg, but Cameron should ignore them. If any of his proposed reforms require changes to EU legislation, they will need the Parliament’s imprimatur. The sooner Conservative eurosceptics understand this, the better.

This insight is part of on-going research supported by a grant from the Open Society Foundations.